My skates came in! I have to hand it to Riedell, when I put my order in with Sin City Skates, I was told 4-6 weeks, and to be happy if I got them within 6 weeks, since they were being custom made.
They shipped in 3 weeks! So yay Riedell and Sin City! 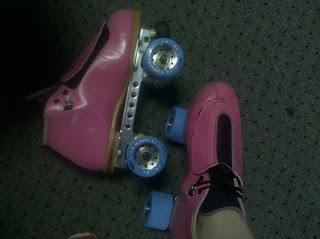 I had custom colors, pink and purple. Reactor plates, which are a couple steps up from what I’ve been skating on. The package came with Zodiac Wheels and Kwik KSN bearings. I decided to try out the wheels, since they’re narrow like my current skinny G-Rods, but I wanted to swap out the bearings with my ceramic bones. Easier said than done, since two of those suckers would NOT come out. It was so close to practice time I just left the two stuck ones in.

My initial reaction to skating on these was that someone had chopped off my feet and put two new feet in their place! After so many years on my 265’s these new skates felt totally alien! It felt like taking my Saturn keys away and sticking me in a Vanquish! The skates kept getting away from my feet at first and I felt a bit out of control.

Fit wise, the boot is amazing! I have no blisters after our practice, no bruising or bleeding on my feet, (teeny bit of rubbing on my ankle, but to be expected) they were just perfect! (And bless Sin City for talking me down a size. For real) The heel lock on the boot? Brilliant! Why didn’t Riedell do that years ago??? My heel did not BUDGE during practice. Such an incredible feeling!
The boot itself is going to be no problem to get used to. The plate on the other hand… it’s going to take some track time!
By the end of a two hour practice, I felt a lot more comfortable. I’m eager to see how I feel after our practice tonight.

Oh and what does a 2 hour practice do to shiny new skates???? 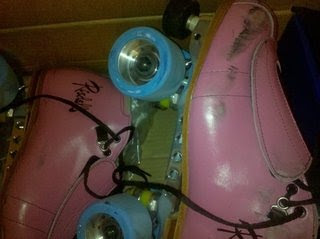 *sigh* It had to happen eventually…