Dill and I decide to have an epic cleaning day yesterday. I got rid of lots and lots of clothing, cleaned out the bedroom closet, and we both worked on the garage.
Found a box of my school days stuff. Painful, awkward, and slightly awesome.
The notes passed in Jr. High were hilarious. From my friend “T”
“I am in LOOOVE! Do you like Jason the way I like Dan? Do you want me to ask Dan to ask Jason if he likes you? You guys should so go out!”

It goes on like that for quite a while. But the very next note I found from “T” says:

Oh painful teen years. I do not miss you even a little bit.

Also found my old player sheets from playing Vampire Masquerade, and my Crow trading cards. This probably explains why Jason never did go out with me…. 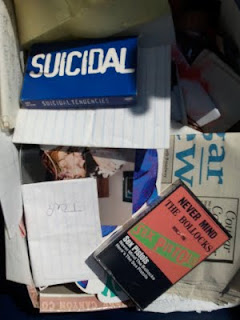 I remember getting those tapes. I had a cd player, but couldn’t find the Sex Pistols on cd. So I had to beg my dad for a tape deck, which I think baffled the heck out of him. But he found an old one for me to use, so I could blare my punk music with sufficient raspy lo-fi quality.

Hey look! My new book is already getting some blog love! KnitKitten

So yes, the new book is a nerdy, geeky, knitting book! It’ll have tons of fun projects, and some AMAZING photos, set in a really cool location!

Can’t wait for it to come out!

I have friends of almost all faiths. I’ve got Pagan friends, Christian friends, Catholic friends, Jewish friends, atheist friends, and the “well, maybe there is something, maybe not. Let us ponder this over a beer” friends.

The past decade or so, I’ve been considered pretty laid back by most of my friends regarding religion. But lately, I’ve been ranting more and more about the “mega church” and why I think it’s not only a bad Christian institution, but why I think it’s bad for the community in general.

With apologies to my numerous friends who attend and love these churches, I’ve seen them personally hurt my business, and nearby businesses. In most cases I don’t think it’s intentional, but it is happening.

Every mega church decides to put in a coffee shop. Since it’s under the umbrella of the church, they don’t pay taxes the way my coffee shop has to.
So here is a coffee shop, making profit and not getting taxed. They take business from myself, and from other local coffee shops. Not only that, but I have yet to see a single church coffee shop in our area use a local roaster! How does this support their local economic community?

Now the latest trend, at least where we live, are the church fitness centers. Again, not taxed, so they practically give away memberships. $100 a year for a family of four? Who wouldn’t sign up for that???
Meanwhile, other gyms are closing down. So again, mega church using an unfair tax advantage and hurting their local community businesses.

However it’s not just the impact on the local economy. I think one of the biggest problems, is that these giant churches, with the coffee house, the day care, the fitness center, the gift shop, and oh yea, a place of worship, no longer require the thing that used to make me admire Christianity so much. Bravery.

What’s the braver scenario? A Christian running on a treadmill in their church, next to another member of their congregation, discussing grabbing a coffee on the downstairs level of the church, where maybe they will meet up with other members of the congregation?
OR
A Christian running on a treadmill at a gym. The person next to them can’t get their treadmill to work. The Christian helps them out. Every day they run side by side and talk. The Christian is a good example of Christianity. They are kind, they are courteous, they are in general, a good person to be around. The subject of faith comes up. Christian invites non Christian out to discuss things over a coffee, at the local coffee shop. In public. Other people are around. Maybe they’ll hear the discussion and ask questions.

The funny thing is I see this brave scenario more with teenagers than I do with adults. All the bible study groups that meet in my shop seem to be teenagers. And when other teenagers try to put them down or snark about their faith, they might get more emotional than an adult would, but they stand their ground, and explain their beliefs.

Maybe I just don’t understand the point of the mega church. It seems to create a bubble around the church, so the congregation never has to leave, or go out in the community, or have their faith questioned by someone who might not necessarily believe or understand the things they believe. Once again, it no longer requires bravery, which I think should be a trait in people of all faiths. I would rather see a congregation out and integrated in the community, leading by example.

Leading by example is at least one of the reasons I’m so jazzed up about this subject lately. It’s not just their business impacting my business. It’s also the people I see that run at least one of these churches. Without going into too much detail, there is local person that set up a fake website (we had the .net of our name, he snagged the .com of our name) and pretended to be my coffee shop. He does espresso bar catering (as I do) and when someone would email, making it very, very clear they thought they were addressing Strange Brew Coffee, he would pretend to be the owner of Strange Brew and book the catering job.

That is one very, very small example of what he does. Every time we catch him at something, we have to pony up to our lawyer to get him to stop. Trying to purchase real estate under our name, impersonating us in emails, purchasing product under our account causing me to get a past due bill… it goes on and on.

What’s my point? This man is the director of worship ministries at a local church. In fact, he has “been a transformational leader of God’s people in worship”. This church isn’t a mega church yet, but they want to be. With this type of businessman leading the way.

I know that in 9 times out of 10 these sort of places build up from the best intentions. I just have to wonder if those running the show see or consider the impact it has on their local community.