Had such a perfect thanksgiving weekend here! Kicked off Wednesday with an incredibly busy day! We were swamped until about an hour before close, which I always think is just perfect!
Since my family travels out of town, and Dill doesn’t have family that does Thanksgiving close by, we always end up doing our own misfit style thanksgiving. This year, we headed over to our friend Will’s house, where the majority of guests took part in a deep fried turkey while I enjoyed a lovely tofurkey!

But Friday was the real treat! I actually got to see my brother! He moved to TN, got his PhD at Vanderbilt, and now hangs out there being a smarty pants and teaching others how to be smarty pants as well. And occasionally catching them cheating on papers, and sharing the stories of how stupidly they got caught.
We met up at Vino Villa which is our new favorite hang out. Wine shop downstairs, comfy chairs to eat food and drink your wine upstairs! My brother and I got very drunk and argued about grammar. Because we are nerds. 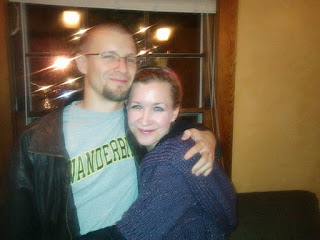 I’m lucky. I hear other people complain about having bat shit crazy siblings, or dreading seeing their brother or sister, but my brother and I love getting together. He’s smart, kind, funny, and does not mind being a nerd. It’s just hard to get together with him, since he lives so far away. It doesn’t help that I own a business that ties me down, while he has 500 children. (Okay 3. But I believe they make the noise of 500)

So that’s the first part of the holiday season down! Now we enter a busy handful of weeks where I will travel 10 hours to bench coach a roller derby team, design some patterns for a new project, and get ready for the upcoming release of Knits for Nerds!

Have you ever had someone ask to see your ID when you pay with a credit card/debit card? Does it fill you with a blind rage? Do you smart off to the person asking for your ID?
No?
Instead, do you politely show your ID, proving that you are in fact, the owner of the card? If so, thank you. Thank you so very, very much.

Here’s the story:
There is a woman who has been coming to my coffee shop for at least 2 years. The first time she came in, she handed me an unsigned card. The name on the card was a man’s name, so obviously, I asked her for her ID. She informed me it was her husbands card. I said that was fine, as long as she could show me her ID and they had the same last name. She said they didn’t, so I said I couldn’t take the card. A 10 minute argument followed. Finally she just paid with cash.

This went on for about a year. At least once a week we would have the exact same argument. Finally she just gave up and always brought cash in. For at least a year I have not had to argue with this woman over this stupid debit card. Until yesterday:

She came in, ordered, and handed me the card. I sighed internally, and asked for her ID.
“Seriously? I forgot it. It’s my husbands card, you know this!”
“Well, I’m sorry, but I’ve never seen your husband, I don’t know him, and I don’t know that it’s okay for you to use this card”.
“EVERYONE here has taken this card before. Everyone. You’re the only one who gives me a hard time about it.”
“Well I’ll make sure that we have a staff meeting about it and get that cleared up. Because no one here should be taking this card” (Side note. She was lying. One person took the card before, I caught him doing it, and we had a discussion about it after. It’s never happened since)
“If this card were signed you would have to take it! I don’t understand what the big deal is”!
At this point her voice is getting higher and higher pitched, so I tried to stay calm and diffuse.
“Even if it were signed I wouldn’t take the card. You don’t have ID proving that this card belongs to you. Honestly, how upset would you be if someone stole this card, and no one checked ID for it? It’s honestly for your own good that I’m asking for ID”
“I’m going to just have you call him, and he’ll tell you it’s okay. This is just ridiculous! I can’t believe I seriously have to walk all the way (Interjection: all the way is about 100 yards here) to the ATM machine!!!”
“Look, I’m sorry. But a phone call won’t let me check ID. You have to get cash, otherwise I can’t run this transaction”.

She gave a frustrated kind of gurgle noise and stomped out, returning about 5 minutes later with cash. I spent those 5 minutes practicing deep breathing in the back room, trying to calm down.

It would be one thing if she and her husband came in together a lot, and I knew them well as customers. I would be less apprehensive about letting her use his card. But I have never, ever, seen her come in with anyone other than the women she meets and hangs out with. I have people that get aggravated when you ask for ID (my favorite is when the card says “SEE ID” on the back and they get furious with you for checking, since they actually don’t have their ID on them.)and that’s fine, it’s inconvenient. But actually getting angry at the person who is looking out for YOUR best interests, and trying to protect you, is infuriating.

Anyone else have horror stories about people raging about ID checks?

I made a bunny hat for my employee, and Naptown Roller Girl, Itsy Gitsy! She really wanted me to make this for her! I’ve got to work out a pattern for it, as I just free formed the thing! It started off HUGE until I felted it. I think it came out really cute! Bonus: when she talks while wearing it, the ears waggle. 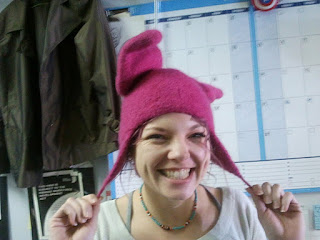