A couple weeks ago, myself, Dill, Kerrie, and Papa Dark took a drive up to see Lorraine, and more importantly, see some DERBY! Lorraine is on a team near her home, but they have no coach. I’ve been trying to help out where I can. I send them drills and practice ideas, watch their bout dvd’s and break down, minute by minute, what is going wrong and what is going right. For this visit though, I came up to actually coach on the bench, along with Apron from Minnesota.

After the long, 10 hour drive, (which really, doesn’t Lorraine have minions? Can’t one of them remove one of the states between us or invent a tractor beam or SOMETHING???) we arrived at her bosses house, who was getting some writing time in. Deciding to be as unobtrusive as possible, we headed down to the library to visit the cats. 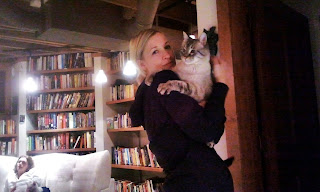 This is Joey, who is the biggest cuddle bug EVER! He always wants to be held, and you can hear him purring through a closed door. Sweetest cat ever. If you want to read about how Joey came to live in Neil’s house, click here. 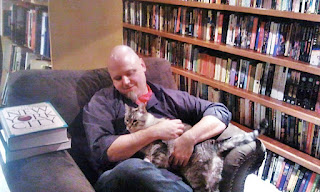 Everyone got some cuddle time with the kitties.

Since Lorraine and I had to wake up super early in the morning to go to pre-bout practice, we stayed at her spooky house, while everyone else stayed with Neil. Which for them, meant setting up a signing production line for the Neil and Amanda cd’s!
Dill Her0 also got to tell Neil tales of the Krampus, which has been his obsession this Christmas season. I’m told that after that, they made wax out of honey until 2am, then finally begged off and went to sleep.

On our way to the bout the next day, we had to stop off and get water. At the grocery store. Which happens to be, the GREATEST GROCERY STORE IN THE WORLD.
Know why? These cookies were their free samples. 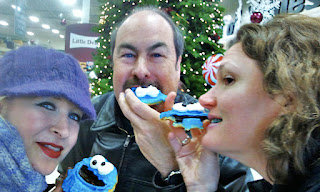 Yea. Giant cookie monster cookies were their free samples. Along with bags of candy, apple cider, and popcorn. I freaking love Wisconsin. 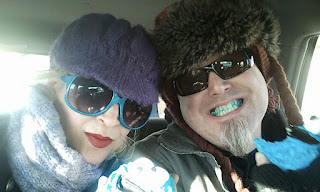 There was lots of bout stuff. It was amazing to see the difference between what this team had been and what they are turning into. The first few times I saw them, I saw a lot of great individual skaters who were all on the track being great as individuals. Problem was, individual greatness doesn’t necessarily mean a great team. Now that they’re working together? Well, let’s just say that when I finally looked up at the scoreboard and saw that we were about 200 points ahead, I started letting them try crazy plays out on the track, letting everyone jam, and just having FUN! It was great!

And then there was the after party….
Let’s just say that I may have earned a new nickname, thanks to Allie Gator of the Mad Rollin Dolls. And let’s just say that someone needs to insist on bars giving her PLASTIC cups from now on, not glass.
Oh look, a picture of Daisy and Dill! (that’s my version of pointing and saying, “What’s that thing behind you”?) 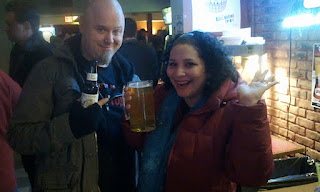 Don’t ask why this picture is upside down, or why I can’t flip it around. I don’t know these things… 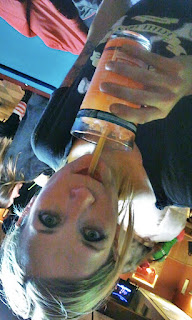 But look how heavy and slippery that glass is! I mean really! Who wouldn’t drop it? 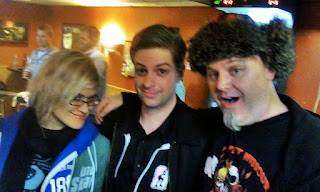 Crashed out that night at the big house. These dolls from Coraline were actually used int he movie. I am so in love. 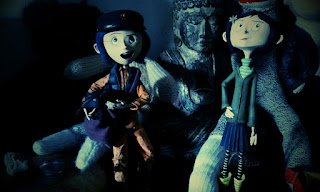 But this creepiness was right next to them. I swear it’s eyes follow you around the room… 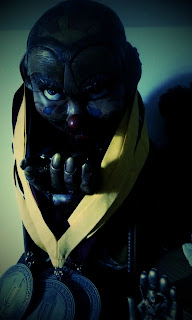 This is Dill, telling the story of Krampus on a coffee shop chalkboard. 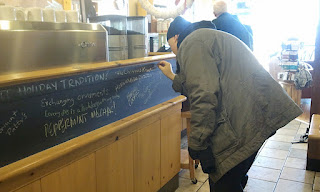 He wants to bring the Krampus back into Christmas. 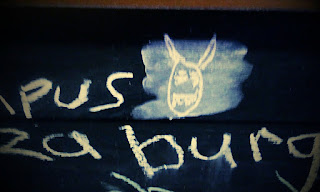 Lorraine has a bathtub in her dining room. 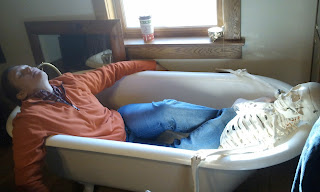 With a skeleton in it. 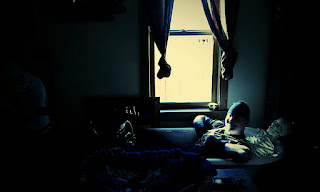 I’ll tell the rest of the weekend in the next blog post! Escaped horse! Zombies! Knit gloves!