When I signed with Andrews McMeel for this book, my agent and I lobbied to use two of my favorite photographers. Tom Klubens and Marc Lebryk .
I’ve known them both for years through roller derby. They’re usually on the sidelines at Naptown Roller Girls bouts, and they helped do our yearly roller derby calender. I knew they would both understand that I wanted the photos to be both really, really, cool AND functional.
We did some of the photos around Indy, but the absolute best was getting to do the main photo shoot up at Neil and Lorraine’s. It was a long weekend where cats and dogs were known to jump into what would have been the perfect shot (though in one instance, the cat made the shot perfect)we battled cold, snow, and in my case, a lost voice.
Marc blogs a little bit about it HERE.

One of my favorite outtake shots was of our friend Dora, in Neil’s rather creepy attic. 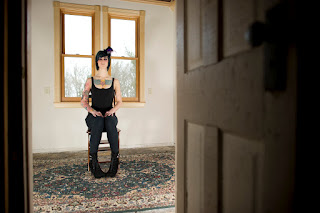 Marc took that one, and there is just something about it. The blank expression on Dora’s face, the door swinging open into the shot; you get the feeling that something VERY BAD is going to happen if you walk into that room. In fact, after the picture was taken, even though Dora was downstairs, doing make-up on Jane for the next shoot, I half expected her to still be sitting in that chair in the attic, waiting for me.

I know Marc is doing more blogging about the photos and I’m hoping to post some of the goofy outtakes myself! I’ve also already started getting photos of people who have made projects from Knits for Nerds, so I’ll be posting those as well! If you finish a pattern make sure to let me know so I can post it on here!

Today is the official release date for Knits for Nerds, but a few little birds told me yesterday that Barnes and Noble had it on their shelves already!
Now, with Knockdown Knits, only a few stores actually physically carried it on the shelves. Borders was one, and a FEW B&N locations had it, but not all, and not the one right down the street from my house. So I didn’t really believe that B&N had it on the shelves, not unless I could SEE it.
Which led us to running all of our errands after work, dropping the parrot off at home, and heading over to the local B&N so that I could be a huge dork and take a picture of my book ON A SHELF AT A BOOKSTORE.
We looked and looked all over the crafts section, and couldn’t find it anywhere! Finally, Dill went up to a kiosk and asked a member of the staff where it could be found. (I hid behind a display, hoping that my giggles wouldn’t give me away as the crazy author of said book)
He led us up to one of the front display tables, while I did a little jig behind Dill thinking, “My book is on a display table!!!!!”. We took pictures, and the workers kept looking at us, probably wondering what the hell we were doing. I probably should have explained, but I was much too shy, even though I wanted to shout at the top of my lungs, “LOOK! THAT’S MY BOOK”!!!! 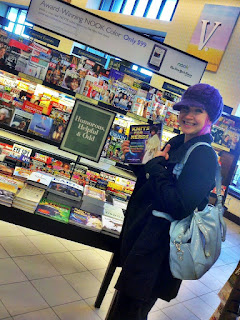 I am SUCH a nerd…

I’ve also heard via Twitter that it’s not just my B&N with that display, it’s all of them! Needless to say, I’m pretty stoked about it.

If you want to check out a cool blog from one of my photographers point of view: go here.

It’s pretty awesome, and has some great behind the scenes shots!

There aren’t enough videos in the world featuring both llamas and yo-yo tricks.

“Llamarama” Feat: Flippy the Llama from Meatball Crew on Vimeo.

Spent last weekend up North. There is a lot of story to this one, involving mad dashes through the Chicago airport, missing flights, and being rescued from the scary airport cots via a kind soul on twitter.
That, however, is for another blog. That blog will include the most insane adventure getting TO a derby bout, and then what has to be the most baffling derby I have ever witnessed in my entire life.
Again, another blog post. This one is going to be a nice fluffy blog post all about invisible white wolves in the woods.

After the epic road trip and derby bout, I had to go all the way back home. To keep me from dissolving into hysterics at the thought of walking into another airport, Lorraine and I decided to spend some time at the big house with Cabal and Lola. Slammer came by as well, to inspect the woods for dead trees that could be cleared out and used in the Leopard Lounge.

First stop, see if the glove I knit for the zombie hand was surviving the winter. 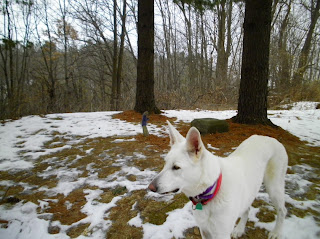 So far so good!

Then the obligatory slide down the hill… 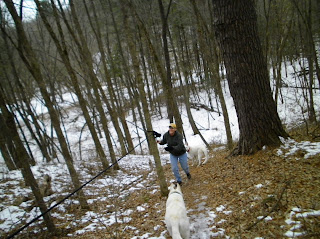 The moment of indecision: Are the dogs still playing, or have they crossed over into trying to kill each other? 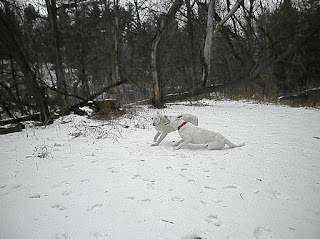 And of course, you can not be on Neil’s property without checking out his big, strong… lamppost.
I wanted my picture by it, since I was wearing a pretty bad ass leather jacket that belonged to Neil. ( I did not have my coat, that is part of the epic travel story) Since I figure that there will be very few times in my life that I am both wearing a bad ass leather jacket and be by a lamppost in the middle of the winter wood, I wanted my picture taken. Lorraine thought we should pose the dogs in the picture as well.
I attempted to wrangle them into the shot: 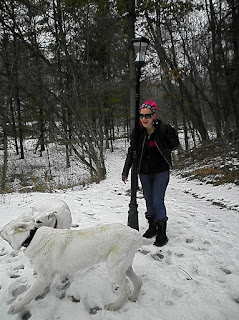 Because, you know, that was totally going to work. 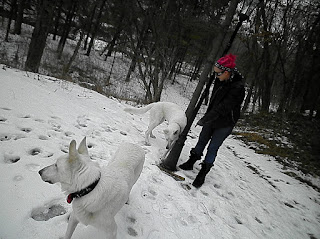 We decided to just take the damn picture. 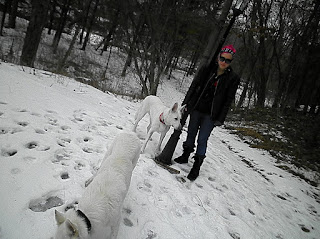 Finished off by checking in on the bees, who are in full on winter mode. So cute if they weren’t plotting my quick death by stinging! 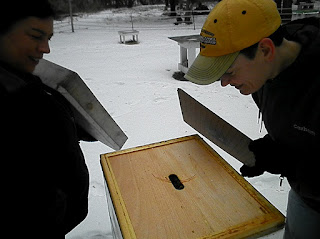 Had to head to the airport after that, where I randomly bumped into Daisy. We had to communicate telepathically through the security glass. (and twitter) 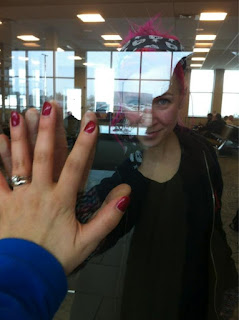 More weekend posts to follow! I know that Lorraine is hard at work on her post about her amazing scrimmage!

One of my patterns is in an awesome book called Vampire Knits: Projects to Keep You Knitting from Twilight to Dawn

. I’ve already made the Lore Hoodie , and I decided I needed to make MY project from the book! I had a bunch of black yarn from Knit Picks, and despite our 60 degree days this winter, the mornings and evenings have been a little chilly. So I made a Love Bites sweater!
It’s a guys sweater, and I went with a slightly larger size in case Dill wants to wear it as well.
Knit up really quickly, and there is something very satisfying about intentionally dropping stitches in a pattern! 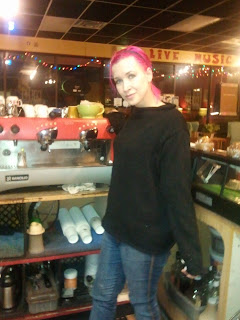 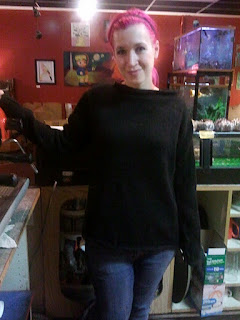 I’ve got another sweater on the needles that I want to get finished before I go to North next week. It’s knit in Sugarbunny yarn. SOOO soft and fluffy. Can’t wait to get it finished and photographed!

Apparently, I have never outgrown playing dress up. I prefer pink hair over blond, neon lipstick over beige or nude, and my bright tights will be covering my legs when I’m 80.
This year, I’ve been putting my love of crazy clothes to good use! Our Naptown Roller Girls point girl, the fantastic Red Rocket, needed some help with the double header bouts. Knowing that I had to convert one of my bedrooms into a closet, she figured I was the person to ask!
Rocket has always had a flair for costumes at our bouts: 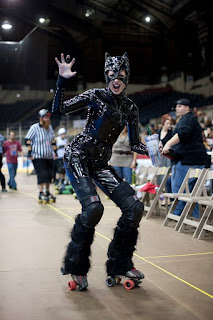 The girl is gorgeous, and always brings a level of “awesome” to every Naptown bout. So I knew that if I were going to score for the Belles bouts during double headers, I would have to pull out all the stops! 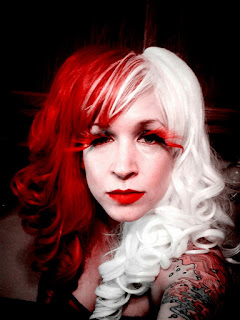 Insane eyelashes and a big wig spruce up just about anything! (Since everyone who saw me that night asked, I’ll just say, the eyelashes were not as uncomfortable as they looked. They were REALLY long though, and cast unflattering shadows on my cheeks. That was annoying)

For the next bout, I wanted to go even further. 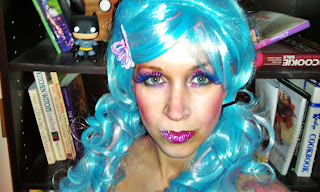 Now THESE eyelashes were annoying. I was excited to finally use them. I bought them at Future Shock in Broad Ripple back in the mid 90’s, and never took them out of the box! They’re metallic blue, and itched like crazy. The lips were fun. I took a combo of lip gloss and eyelash glue, coated my lips in it, then dabbed on a couple different colors of glitter! The result? Couldn’t put my lips flat all night! Constant duck face! They looked great though!

I’ll get more pics of the actual outfits later, but right now knitting is calling me. It’s actually shouting at me to be honest. It’s trying to drown out the sound of taxes, bills, coffee shipments, and the treadmill!