Now, let me give some full disclosure here. I’m not a huge supporter of mens derby. In all honesty, a big part of me feels that men get top billing in EVERYTHING. With very, very few exceptions, it’s all about the men when it comes to popular sports. So part of me feels like, just one! Couldn’t they leave us with just one without trying to come in and take over?

However, I do try and understand. Derby is awesome. I understand wanting to play it. It’s fun, it’s full of action, of course everyone wants to play derby, even boys. So if I don’t like it, just don’t go to the boys bouts right? Let them do their thing, best of luck to them, but I’ll stick to girls derby.

Then I found out a few weeks ago that Naptown was making the main event of their season opener boys vs. girls. I considered not going. But then one of my best friends made the roster for the first bout, the Belles vs. South Bend and I knew I had to go and support her. Then a few friends were coming into town and wanted to see their first derby and my decision to stay for both bouts was solidified. Besides, I had never actually seen a co-ed derby bout. I should watch it, then form my opinion right?

Besides, I had hope. I hoped that once I actually saw the bout, my derby fan brain would kick in and I would love watching some awesome derby. Because it’s derby! Even co-ed derby has to be awesome right?

The opening bout, Belles vs. South Bend, was such an amazing nail biter that I was pumped for the second. I was in full on fan mode.

When the teams lined up I started to get excited. It’s derby time! This is gonna be fun! I probably won’t even notice that it’s guys playing! Then… the whistle blew.

The girls got pummeled. I mean, sure, there were some great jams. But there really isn’t much you can do when it’s 150lbs vs. 250lbs. The majority of the guys on that team towered over the girls. Naptown kept sticking one of their tiniest jammers out and one of the biggest guys would just get in the back and beat on her, over and over again. It was uncomfortable to watch. Doesn’t matter that it’s sport, doesn’t matter that the girl knows what she’s doing, I’m still watching a big guy hit a small girl. It sucked.

I tried to work my brain differently when I was watching, but I couldn’t. Here’s the thing, when a girl blatantly tries to trip another girl, as a fan, you get mad. You cry bullshit. You yell at the ref for not catching it. But when a man tries it against a girl… it’s a whole new level of pissed off. Myself and some of the people around me were seeing red. The Rebels were winning! Why try such a dirty foul? These guys are jerks!
Whereas, had it been a girl pulling that move it would have been, sure, still anger, but not that INTENSE anger.

I want to stress that I’ve met some of these guys off track and I like them. I’m sure, just like derby girls, that the meanest, nastiest person that fouls on the track can be a total sweetheart in real life. That’s just the way contact sports work. It fires up your adrenaline, and sometimes in the heat of the moment you make a jerk decision. That’s just how it goes.

During a discussion with friends after the bout I thought up a things in relation to this. Would it bug me if it were guys vs. girls boxing? Yes. Wrestling? No. I’ve seen (real) wrestling where it was boys and girls. Since there’s no hitting, it’s not a big deal. Football? A girl on a guys team or mixed teams? All for it! In fact, I would say the same for derby. If the teams were mixed with guys and girls on both teams it wouldn’t bug me at all. And you know, maybe in 30 years I’ll look back at this blog and find my thinking incredibly old fashioned. I accept that.

The bout didn’t seem to be a huge hit with the fans. They started walking out during the second jam and by the half time they were leaving in large groups. It went from sold out and overcrowded to large gaps in the stands. It just wasn’t fun to watch! There were complaints on line as well. (And to be fair, some support!)

I saw one person comment, in response to complaints about the bout from fans on facebook, something to the extent of ” pretty dissapointed. You fans are the HOSTS and need to treat the visiting team with the respect that guests deserve”. I’m paraphrasing here, but this statement bothers me. The days of roller derby seats and stands being filled with just the girls friends and family are long gone. Fans are not “hosts”. Fans are people paying their hard earned money to watch a sporting event. They don’t “owe” anything. In fact it’s the opposite. They have literally paid money, received a ticket and are “owed” a womens flat track roller derby bout.

Naptown Roller Girls probably didn’t have a lot of choice for their season opener. The way the new WFTDA rankings system works in conjunction with their schedule means that they would either have to blow a lower ranked team out of the water (which also would have resulted in fans leaving in droves) or play an intraleague bout. (which they tried last year and received complaints about) So kudos to them for trying something new. It’s just not something I enjoyed , nor would I want to see it again.

I believe that Kyle Cassidy is working on a blog post about the photos we did at Starbase Indy, so I’ll talk about what we did the day after.
We headed over to Ohio to photograph John Scalzi and his wife Krissy. I met John and Krissy over a year ago at a party at Neil Gaiman’s. Since then, Krissy, myself and our friend Kerrie have gotten into all sorts of mischief. They’re the only girls I know that I can call up, offer them beer and tequila and in exchange they will come peel wallpaper and paint a room.
When I told Krissy about Geek Knits she informed John that he was in fact, going to be in one of the photos.

We drove up and after Kerrie, Kyle, Krissy and myself went for a quick run in a beautiful park setting then got down to work! 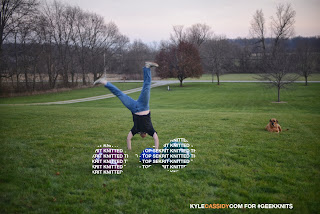 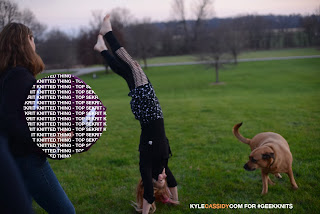 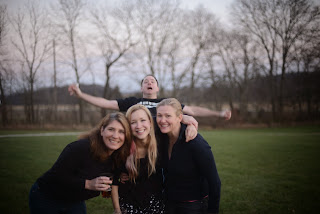 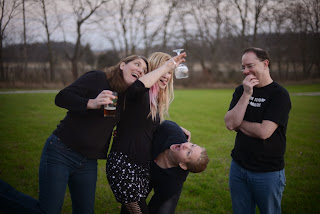 John and Krissy took us out to dinner (thanks guys!!!) along with their daughter Athena, who is very smart, very mature and now my mortal enemy for playing this song for me:

Can. Not. Remove. Earworm!

More and more to come! In the last couple months of book stuff and the pace is picking up!

Kyle Cassidy is here in Indiana finishing up a long weekend of photos. We dragged him out on Thanksgiving, fed him lots of potatoes and tofurkey, then shoved him in a very tiny room filled to the brim with many guitars.
Friday and Saturday we shot at Starbase Indy, then Sunday we went to the Scalzi compound. There was some downtime over the weekend however, which Willie the Corgi insisted we fill with playtime!
Kyle learned just how joyful a Corgi can look when he realizes you’re about to throw the Frisbee for him! 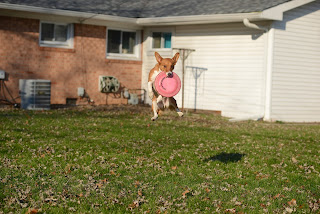 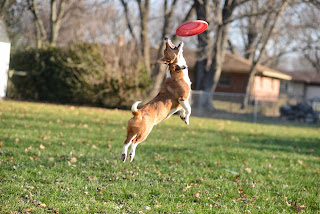 Kyle took these amazing photos of Willie. Much better than the photos I usually try and snag with my Iphone!

An actual blog post with actual information about geek knits to follow. In the meantime, I need to learn how to make an animated gif out of all the photos of Willie catching the flying disc!