This gorgeous book was put together by Genevieve Miller, who also wrote Vampire Knits. I’ve contributed patterns to both of her books now and she’s contributed to both Knits for Nerds and the upcoming Geek Knits!
She’s a lovely designer and and put out an amazing book! Check it out!

Here’s a couple of pics from the night:

A ref from Tri City came up and introduced herself and after she skated away I thought, how did she know it was me? 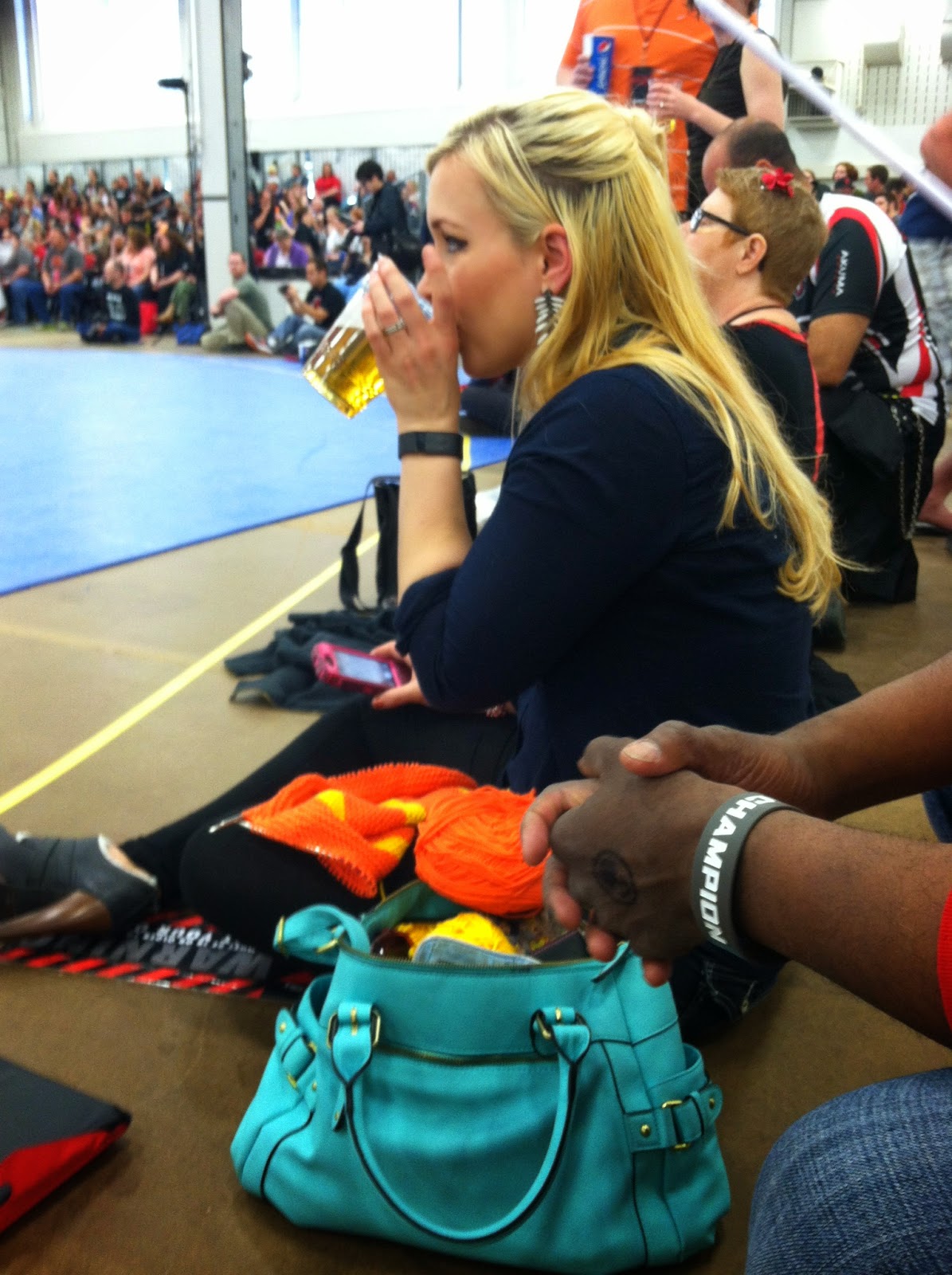 Then I looked at myself. Beer, pink phone, and knitting. Right. I guess I do stand out a bit!

(On a side note, if you ever do see me in public and are one of the readers of this blog, I LOVE LOVE LOVE when you introduce yourself. It lets me know I’m not talking to the great internet void all alone)

Right, I’m going to get back to designing some new patterns, one of which will be a lovely freebie!

I have weird eating habits. I’m the first to admit it. I drive my friends crazy when they see me eat pizza, as I first pick off all the topings, eat them, peel off the cheese, discard it, then peel off the top layer of doughy goodness from the slice, eat that, and discard the bottom and crust of the pizza.

If I’m at home my burritos get completely dissected, insides get eaten first, then the tortilla if I’m still hungry. And sandwiches are almost the same deal. Insides first, then pick at the bread until it’s gone. None of this is because I’m trying to avoid the “bad” parts of anything, I’m just a weird eater. My friends have always theorized that it’s because I’m a vegetarian and I have the urge to kill my food in some way.

Anyway, candy is it’s own special brand of weird eating for me. Peanut butter M&M’s get microwaved so that they “pop” in my mouth, Kit Kat bars get all the chocolate outside layer taken off (because it’s gross and gritty) and Twix bars get eaten top to bottom. As in, top layer of chocolate and caramel get scraped off and eaten, THEN the cookie part of the bar.

Reece’s however, have their own special place of picky eating for me. I am a firm believer in the peanut butter to chocolate ratio of peanut butter cups. I want maximum peanut butter, minimum chocolate. (That happy couple of months that introduced inside out peanut butter cups were heaven for me!) So when Peanut Butter Egg season rolls around, I am the happiest sugar overloaded girl in the world, as those suckers are almost ALL peanut butter with just the thinnest layer of chocolate. That’s actually about the only time I will eat a Reece’s. When someone gives me one of the normal peanut butter cups they usually look on in horror as I discard the entire top and side layers of chocolate.

So imagine my delight when we went to the store the other day and saw the MEGA REECE’S EGG!!! A huge, massive Reece’s egg with just the thinnest layer of chocolate, per the picture on the box. JOY! So we bought it, and I skipped home, ran 4 miles to justify eating half of this sucker, and we cut into it only to find… 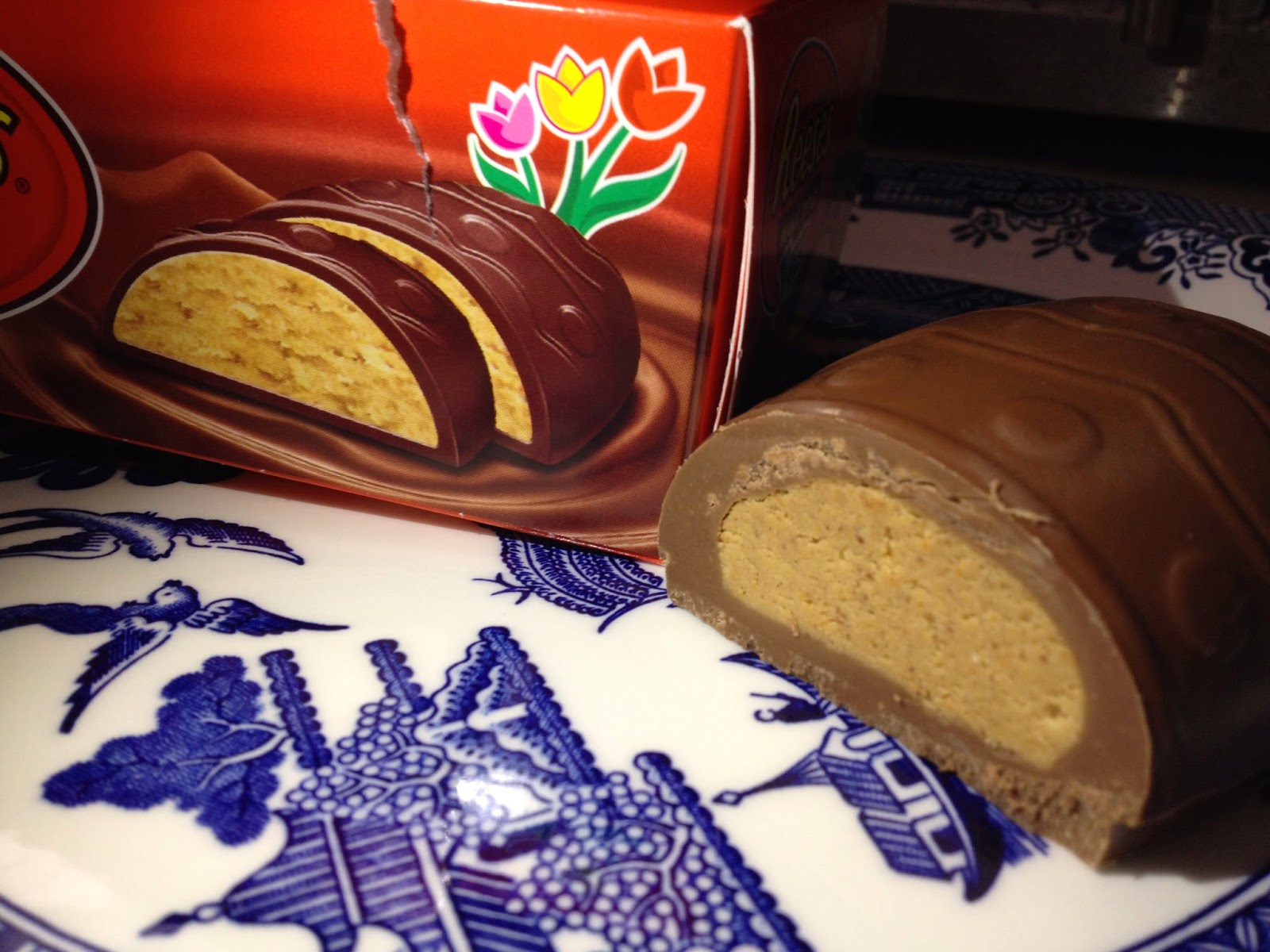 Look at the picture on the box compared to the actual egg. The box shows the tiniest layer of chocolate with gobs of peanut butter whereas in real life, this thing is nothing BUT chocolate.

My dreams of a mega egg have been crushed. I may or may not admit to buying a second egg to see if this was just a one off mistake or if they are all like that. Sadness to find that they are in fact, all mega eggs of lies.

The husband is trying to reason with me, as the mega egg is a greater bargain than the individual smaller eggs, but I think deep down he knows it’s an argument he’s not going to win.

Now if you’ll all excuse me, I’m off to eat all the peanuts out of the peanut M&M’s.