As part of my somewhat obsessive, “it’s Doctor Who therefore I must knit it” kick I’ve been on, I bring you, the 12th Doctor’s Scarf!

When it was first announced that Peter Capaldi would be the new Doctor, I of course hit the google image search hard and heavy. I came across this image and knew that I absolutely had to knit this scarf (and offer up a pattern)! 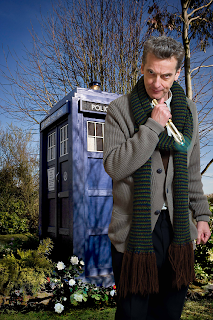 After lots of zooming I decided it looked like a 1×1 rib and was probably folded over to create that thickness. Since I am the Queen of avoiding seaming, I knew that if I knit this sucker flat and was faced with the prospect of seaming 6 ft of scarf, well, I would never have a scarf. (Minions. I need minions who like to seam. Or elves.)

After a couple months of picking this sucker up and putting it down again, it’s finally complete! Fair warning, this 1×1 rib with colors changing each row… it’s kind of a pain. The “aha” moment for me was when I got smart and put the three different balls of yarn into three plastic sandwich bags. It made it much easier to untangle every few rows. Really wish I had thought of that when I started! 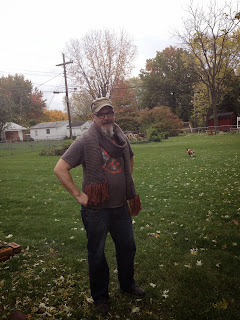 Dill has declared that this is “his”. I am conceding, considering how much he puts up with the knitting that goes on in this house. (and the deadlines and the tears and the OMG I HAVE TO FROG THREE FEET OF LACE YOU DON’T UNDERSTAND!!!! rants)

I may have to steal it back occasionally however. This sucker is WARM and soft. I love it! 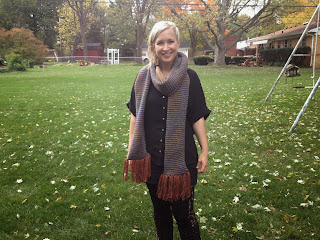 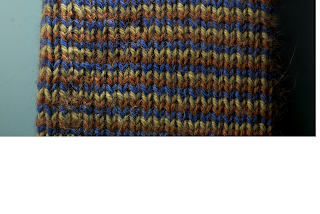 Marc Lebryk provided this detail shot for me. It shows the colors with a little more vibrancy than my poor camera phone on a cloudy day pics!

I’ll have the pattern up at some point. I just need to measure and write it up. I’m sure this scarf won’t be as iconic as the classic Doctor Who Scarf but I think a fan or two might recognize it, especially if it appears in an episode this season and not just a promo picture. (Confession, I’m an episode behind right now, so it may have already happened). 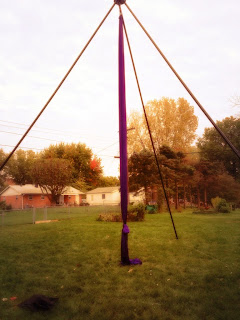 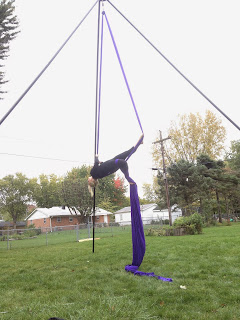 I’m really excited about this. I love silks, but classes can be a bit of a wallet drain and hanging from the tree in the front yard isn’t high enough. I haven’t tried any drops on this yet but it seems sturdy so far. We’re going to set it up for a party we’re having this weekend and let (sober) people play on it. Considering half my friends take circus classes with me it should be a good time!

For some reason I spent the summer knitting bulky knit cowls. No idea why. Here’s one I actually remembered to photograph last night. The pattern is from Vampire Knits: Projects to Keep You Knitting from Twilight to Dawn

. It was easy and quick to make, which is good, as sometimes you just need a weekend project! 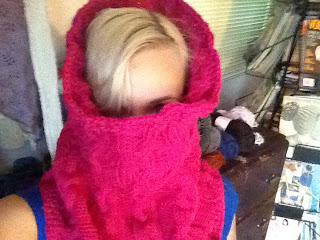 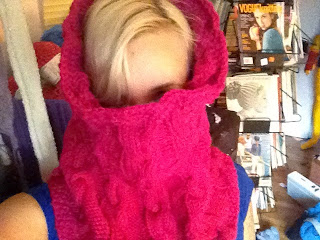 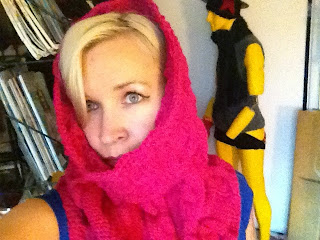 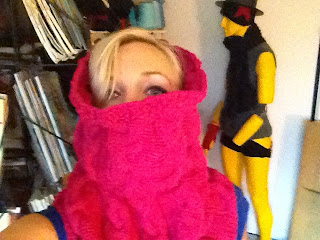 Vampire Knits was the first book by Genevieve Miller that I contributed to and I absolutely love it. She’s a great author to work with. Also, I say this at conventions and talks all the time, if you’re looking to get patterns published, or thinking of writing a pattern book, try being a contributor! It is so much easier! You get your yarn, turn your patterns in, maybe answer a few tech questions and you’re done! Much less stressful than actually being the author or the lead on the book!

Also I finally organized my yarn room. Expect more finished project pictures as I found an entire box of things that just need blocking and weaving to go from UFO to FO! 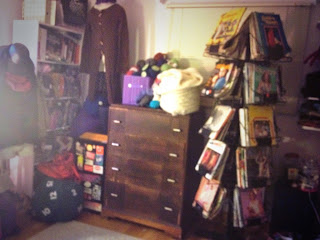 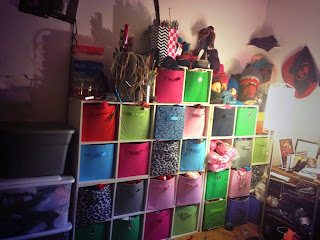 I made this awesome blanket pattern for Knit Picks with some lovely (and washable!) Brava Yarn. Best part? It’s FREE!

It’s a great blanket if you’re a newer knitter looking to tackle increases and decreases. It starts off with just a couple stitches and gets bigger towards the middle, then smaller as you finish.
Download it HERE and enjoy! 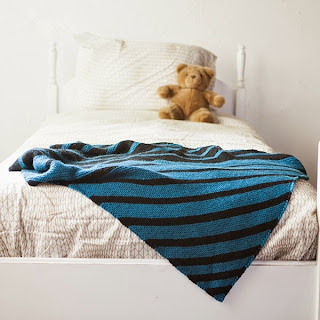 I keep meaning to blog, I really do! I have a bunch of freebie patterns I need to post up here, including a new Doctor Who pattern! Alas, Geek Knits edits, new book submissions, and LIFE are all getting in my way.

So I’ll just say two things. If you’re a geek and love crafting, consider checking out Muse Con in IL. I was lucky enough to attend as the Guest of Honor and had an absolute blast. There’s stuff to do! Craft classes, music classes, all kinds of things! It was an amazing amount of fun. 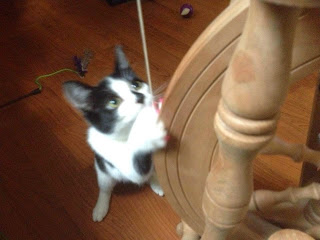 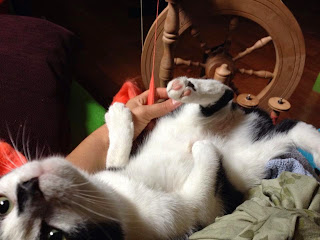 Alright, next post will be the new Doctor Who pattern! Back to the needles!