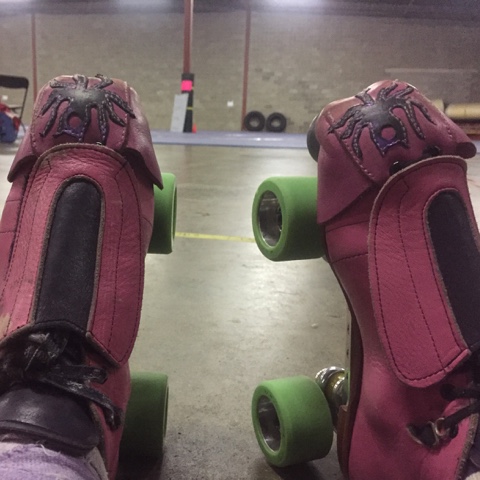 I love reconnecting with derby thanks to Naptown Roller Girls and Rolling Thunder. No matter how hard you work out, there is no sore like derby sore!

I’ve had a theory I’ve been wanting to test for a while regarding drinking and learning how to knit. Luckily, my friend Paige, who’s been struggling with trying to learn how to knit, was willing to be my test subject!

Also, let me tell you, condensing two hours of this hilarity into 13 minutes was really hard!

Check out the video and let me know what you think! Should we try it again with fair isle? 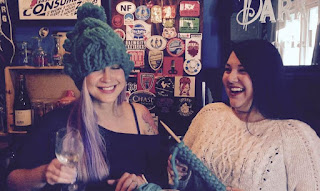 When we first formed Naptown Roller Girls, we wanted to do something that everyone said was foolish at first, we wanted to not have intraleague home teams. Our idea was that Naptown would have the top skaters and would only play teams of other top skaters.
Other leagues questioned us, told us that the best way to get butts in seats was to have home teams that bouted each other, then a travel team that would play other leagues.*
*side note to add that we never considered it, beyond the brief few months that Naptown was called Crossroads, and we were a league made of Bloomington and Indy, and thought for our first game we would bout against each other.

I’ll admit, I was a snot about it. I thought that home team bouts were just a glorified scrimmage and that what we were doing was “real” derby.

After over a decade of derby involvement and observation I have found myself wondering if Naptown actually needs to look at embracing home teams.

The idea of only having an A team play other teams from around the world is a great one, and for many years it worked here. NRG packed thousands of butts in those seats. Sell out crowds. A bleacher breaking from too many people attending a bout. Lines out the door and crowds outside disappointed they couldn’t get in.
Then the rankings system changed. It became harder to get other teams out to play and the ones that did show up were often pick up teams or teams that just weren’t ranked nearly as high as NRG. So there were blowouts. Fans began to leave after the first half of the game. I sold tickets for NRG at my job, and I heard over and over again, “It’s boring now. I don’t want to see a team win by 200 points.” and I couldn’t blame them.

Now I’ve seen Naptown struggle with attendance and seeing the example of teams like the Dairyland Dolls and Minnesota, I see a great argument for having home teams. Each girl has friends and family. If you double, or even quadruple the number of girls that are playing within driving distance of their friends and family, you’ve got a bigger potential audience. Girls are getting chances to play with more experienced skaters in a bout (Because no matter what, a scrimmage in a practice space is much different than a bout in front of an audience)and frankly, you’re going to have a lot fewer frustrated skaters.
Not every skater is going to be at an elite level. No matter how much heart, how many hours of practice, some skaters just aren’t going to be heading out to skate at playoffs. So to tell those girls that they might never get to bout in the main venue at home, with their loved ones cheering them on kind of sucks.

I wouldn’t want to see every single game be between home teams, but it might be something to consider for a good chunk of the season. I hear of fans getting really passionate about their home teams, so it would be interesting to see if Naptown fans would react the same way, especially when it’s something that Indy hasn’t “grown up with” as far as derby is concerned.
I’ll say that from my personal fan experience, derby is derby. I’ve seen home team bouts, which I hadn’t before we formed NRG and… I like them. I really, really like those games! Plus I WANT to see more of the talent that Naptown now has to offer! There are so many great skaters that fans just aren’t getting to see in action!

I’d like to end by pointing out that I’m not writing this as a representative of NRG and that all of these thoughts are my own. Nor have I heard of any plans to do something like this, beyond the one mixed team “B” game bout that took place at Bakers Life Fieldhouse several years back. I simply spent a weekend talking to derby people in another state, watching a lot of derby, and decided to put virtual pen to paper something that has been swirling around my head for the past couple of years. I love Naptown and I would love to see those sellout crowds of 5,000 again!

Well, Impact has it up on kickstarter again, and can get it shipped to you by Christmas! Not only that, you can get a miniature Joan of Dark to play with! (There was no way to phrase that without it sounding naughty. I tried)
I’m also on the cards, as well as some other amazing skaters from Naptown Roller Girls.

Just a few hours left as of this post!