*all photos by Marc Lebryk

I should have written this long, long ago, but I’ve been incredibly busy, with many deadlines hanging over my shoulder, so the blog had to take a backseat for a few weeks!

The road trip to Philly for the East Coast Extravaganza started off just right. We got on the bus and found COOKIES! Our lovely driver had left them on the seats for us! Adorable!

I slept for most of the 12 hour trip. I love sleep. I never get enough of it so normally, as long as I don’t have a ton of adrenaline going (post bout or post practice) I can curl up like a cat and sleep anytime, anywhere.

We got there pretty early on Friday night, enough time to sit suicide for Windy City Roller Girls vs. Gotham City Roller Girls.
Holy hell. THAT WAS DERBY!!!! Those teams are both amazing, and it was an absolute privilege to get to see them. That bout alone was worth the trip!
My main observations? Suzy Hotrod has the most enviable ass in derby and this girl from Windy City has big boobs. 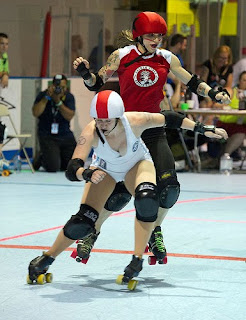 Oh, and both teams were incredibly fast, GREAT at offensive, and some super skilled footwork on the Gotham City jammers part! (see, I paid attention)!

Saturday we had an early game against Maine, the MRD Port Authorities. It was a good game, with lots of lead changes. We ended up with a come from behind victory in the final jam. Excellent derby! Our fouls were frustrating us. One of us was in the box at all times! Honestly, some were deserved, of course, some just confused me personally. Our last tournament, Spring Roll, we didn’t have nearly as many fouls, with almost the same line up. I think it’s just traveling, with different refs than we usually see at home, they’re going to call things differently. Which is WHY travel is so important for a team! It was a great learning experience for us.

Our second and final bout was against DC. They got a good lead on us at the end of the first half, and though we closed the gap at the end, it wasn’t enough. Again, foul trouble. There was one weird call in that one, and again, if a ref is reading, chime in!
One of our players got sent to penalty. She sits, gets release, and as the pack is coming around, the ref calls, “No pack”! then “pack is here”! pointing to the front of the pack. A couple blockers and the jammers were straggling well over 20 feet behind. So our player hops out of penalty and gets behind the first section of pack, where the ref had called the pack. Whistle blows, and she’s sent back to the box for not entering behind the pack.
Either a ref didn’t realize that the first ref had called the front the pack, or I don’t fully understand the rule. My understanding, is that since the back half wasn’t part of the pack, she could enter in front of them. Refs? Anyone with insight?

After that bout we stripped down and hopped in the pool. Our plan was a quick swim, then back on the bus for the long drive home. One of our girls is a firefighter, another a surgical tech, and BOTH would have been in some deep crap if they didn’t report to work Monday morning! 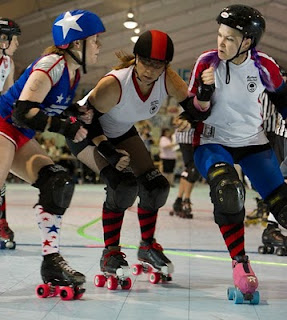 I was bummed we didn’t get to talk to DC. They seemed like a really cool team. I said hi to one of them at the pool, but considering I was out of uniform, dripping wet, and lugging my suitcase around I was not surprised that she gave me the wigged out, “Who the hell are you and why are you saying Hi to me look”?

After that it was back on the bus for 12 hours. I shall not blog about what went on during that bus ride. Not a lot of sleeping though. Hmm. Okay I’ll blog one thing about the bus trip.

I am so, so glad that we got to participate in ECE this year! I got to meet several girls that I’ve only talked to on Ravelry or Twitter. Got heckled by a girl with a southern drawl who shouted, “Alan Moore can kick Neil Gaiman in the ass”!!!!!

I also discovered that almost everyone on my team agrees with me that having a girl crush on Tin Lizzie from Northstar Roller Girls is perfectly acceptable. She was not skating that weekend, and it really bummed me out. But she WAS coaching on the bench, so we all got to oogle. That made up for it.

I could write on and on about my love affair with the weekend. A girl asked me to sign my book, I love Montreal roller derby, made some new friends, hung with some refs and NSO’s, swam in the pool even though I had no swimsuit…

I hope that as a league we get more travel in this year. I have been loving these experiences!