Had my birthday on Sunday! It was a great weekend for it!
Saturday was derby prom (no pics yet, but I had on blue glitter shoes, and we stole the keg during a lightening storm)
Sunday we took the day off of work. I told Dill I wanted him to make German Chocolate Cupcakes for my birthday. He bought me a German chocolate cake. Close enough I say.

Lounged and hung out all day then it was time for STEVE POLTZ! One of my favorite musicians, and I found out he was playing that Sunday night at Local’s Only! Great birthday present right? So I went, and it was the best show ever. Drank a few too many gin and tonics though. But I did knit a hat during the show! Productive AND a lush! 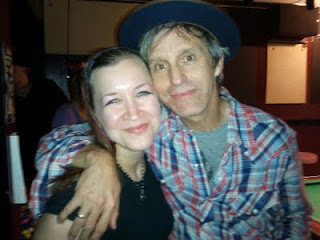 Me and Steve Poltz! My face goes all squinty when I’m drunk. 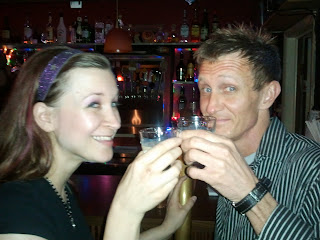 That’s Neil. He used to play drums in my band. Hadn’t seen him in years so it was great to get to do a shot with him!

Lorraine wasn’t at my birthday, which was sad. She did however, send me messages saying “GET OFF TWITTER NOW”! because she knows me, and knows when I should.

My next blog post will be all about my horse Starkey and his hair. Kid you not.