Saturday, May 30th marked the rematch of Ft. Wayne Bomb Squad vs. Naptown Roller Girls Tornado Sirens. It was also to be the first match up between the Ft. Wayne B team, “SWAT” and our Warning Belles. This is the bout we’ve been anxious about all year. All season long, no matter what team we were facing, Ft. Wayne was in the back of our minds. It’s not because they beat us. Hell, North Star Roller Girls have beaten us TWICE, and I wouldn’t give a second thought to stepping on the track with them again! There’s no automatic rivalry when you lose a derby match. Obviously you want to play that team again, and win the second time around, but you can still be cool off the track. It’s tough to explain why the rivalry is there with Ft. Wayne.
In our first season, we went up against them for our second game. They came in more experienced than us, and determined to be known as “Indiana Roller Derby” over us, the upstart Indianapolis league. Ft. Wayne was our first reality check. Our only other game, against the Nashville Roller girls, had been a fairly easy victory for us. We got a lead early on and held onto it! They didn’t come to the after party, but at the time, we just didn’t think much of it.
Personally, I thought that roller derby was going to be a “beat each other up on the track, smiles and hugs off the track”. Ft. Wayne was the wake up call that it’s just not always going to work out that way! Sure, I’d say with the majority of teams that we’ve played, it is. Win or lose, most teams hang out at the after party, and bad blood is pushed aside for the most part. But Ft. Wayne was there to dominate us, and from the second they walked in the Fairgrounds doors, there was tension. It’s carried on over the years too. I don’t know why it started, or what the root cause is, but it has not eased over the years.
Which is why this year, the thought of a rematch has had us all tense. We didn’t want to lose AGAIN, and face the gloating, our own sense of defeat… it was the stuff of nightmares for the months leading up to the bout.
This bout would also introduce new blood to the mix. Ft. Wayne has a B team, SWAT, and we of course, have the Warning Belles this year. I was so nervous for the Belles! I didn’t want to have them go through the same thing we went through. I wanted them to win, be their charming, nice selves at the after party, and hopefully receive the same from SWAT.

The weeks before the bout, we purchased Wii Active. I have since become obsessed with it! So every single day, before practice, after practice, and in between practices, I could be found working out on the Active. Throw in some serious running, and I was kicking my own butt pretty hard. Thursday I promised myself that I would just do one last heavy impact workout, and use Friday to rest. Well, Friday afternoon I was bouncing with nervous energy, so I went for a run. Then decided that the Active was calling me, and I should do some boxing. And since I was there, why not try out some squats with calf raises, kick backs, high knees, side squats, bicep curls, shoulder presses, etc. About the time I noticed my calves were starting to cramp up, I had been at it for almost 2 hours! Whoops! Scalding hot shower followed, hoping to undo some of the damage I had just done. Dill was nice enough to rub out my calves before I went to sleep, hoping that my muscles would just be nice and limber Saturday morning.
Of course, that wasn’t the way it worked out. The body will only take so much before it gets sore, and cramped, and achy. Saturday morning when I rolled out of bed I almost fell down, my legs were so dang sore. I went into work, just to get all the baking done and make sure everything was going as smoothly as possible. I ran home and took another hot shower to try and loosen my legs up. I figured that even if they were sore, once we warmed up to skate my muscles would get nice and loose. I would just have to pay for my idiocy a little bit extra on Sunday and Monday!
Fin and Cleaver picked me up about 11 and we headed to the fairgrounds to eat lunch and get ready for the bout. We did a joint Belles/Sirens practice, which was a first for all of us! It was unusual to have that many girls on the track at one time!
As we started getting ready, I had a huge dilemma. I’ve mentioned it before, but I get very superstitious when it comes to bouts. I had my “lucky skirt” ready to go, but after watching the last bout video, I was extremely unhappy with how much it rode up my butt! I had practiced in my favorite work out shorts. They’re black, 70’s style shorts, and I love them. But I’ve never bouted in them before! They’re not lucky! Did I want to tempt fate?
I decided I definitely did. I would rather bout in unlucky shorts than be worried about my bum showing all night!
The other thing that was hard to get used to was the fact that the doors were opening so early! People started streaming in around 5pm, and while the Belles were in the locker room getting ready, for the first time ever, I was out mingling with fans before the bout! It was a very strange experience, and a bit out of my comfort one. I can come across as rude on bout day, simply because I retreat into my own head, running through plays, visualizing the game that I want, and listening to my lucky playlist.
This time was different. Not only were fans in the building, but being a Star Wars themed bout, there were also Storm Troopers, Darth Vader, Chewbacca… how could I stay serious and bout ready, when I could hug Chewy and get my picture taken with Darth Vader? So I ran around like an idiot begging photographers to take my picture with our various “entertainers”. I have no idea why Jack Sparrow was there when it was a Star Wars themed bout, but who cares? It’s Jack Sparrow! This guy was great too! He pulled it off really well! 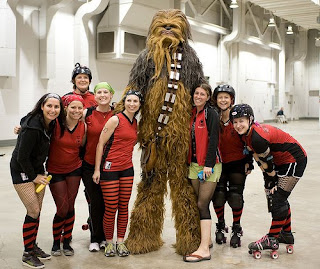 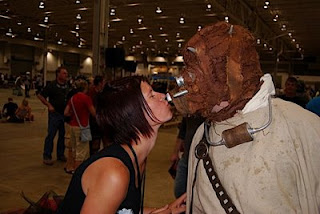 Nay shows no fear of the Sandpeople! 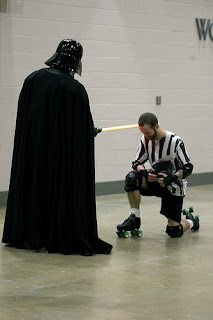 Finally! Proof that refs are part of the dark side! 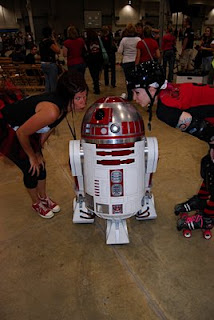 He whistled when we kissed him! It was great, I never saw who had the remote!

After our goofing around, we settled in to watch the first half of the Belles bout. I was all nerves, wondering how they would do against SWAT and hoping that they would secure the win by the end of the first half, so that we could get ready for our bout without having to wonder about them!
Luckily, it was obvious within ten minutes of the first whistle that we could breathe easy. The Belles were working as an amazing unit. Jammers zipping through the pack, (for real, between this bout and last bout Racer Xtacy must have had a rocket installed in her butt) blockers opening holes, and a whole lotta newbie badassery in Ima Hurtchu. I would watch any team that girl skates on. She is going to be an amazing force by next season! (hopefully on my team next time)!
We got ready and warmed up while the Belles sealed the deal on their victory. I was so relived that they won, but couldn’t spend a second to bask in it. My mind was quickly turning to game mode.
After we warmed up, the game stared off with a bang. Both teams scoring only a few points each, it stayed very, very tight. I went in about the 5th jam as a pivot/blocker. We were working very well as a unit, and each time shut down their jammer while our jammer managed to eek just a few points on the board at a time. There were no 20+ point jams in this bout. It stayed tight and close. Sweet C set the mood by hitting a girl so hard her skate came off! 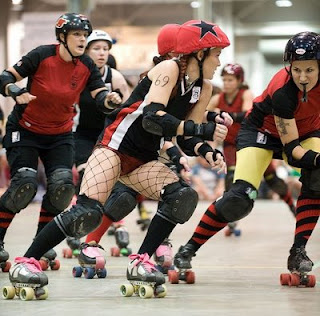 *Sweet C is scary to skate against sometimes. 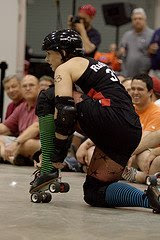 *Trying to put her skate back on
I went out, and something started happening. Our very small lead started slipping away, bit by bit. Ft. Wayne was very successfully running the same play against us that we had seen from the North Star Roller Girls. They would wrap around the outside of the pack, forcing all of our blockers inside, while whipping their jammer around the outside. From the side lines we could see it happen every single time. Point after point got away from us, until it was half time, and we were 19 points down.
Anyone who has ever seen NRG play might know these two fun facts:
1) We have NEVER, EVER come back from a half time deficit.
2) We have never beaten at team who has beaten us before.

So you can just imagine what we were going through when we hit that locker room! In my head I just kept repeating, “This CAN’T be happening”! I was refusing to believe that all of our hard work the past year would end in defeat against the Bomb Squad! We riled ourselves up in the locker room. Right as we got ready to go back out, I looked at Ace and said, “Hey Ace, we’ve never come back from a deficit in the half before. Tonight will be the first time won’t it”. She looked at me and said, “Hell yes it will”!
We knew the play they were using against us, and we came back ready to counteract it. I could see the look on some of our fans faces. The half smile, little nods of “good job girls, at lease you’ve played well”! Like they KNEW that we were already defeated. I knew that all of us were going to prove them wrong.