There are things we know at our coffee shop. I belong behind the bar, making the drinks. Dill belongs up front, dealing with people. His BS tolerance is much, much better than mine in stressful situations. I can make amazing drinks very quickly when the pressure is on, Dill can handle the line in a super chipper manner. See in business, you have to know your weakness and your strength. Still, despite his near saint-like ability to handle the crazy that can come, Mr. Dill Her0 got his FIRST OFFICIAL COMPLAINT!!!!

It’s the end of an era. He is no longer the nice one! Actually, he still is. Right now he’s up front hanging out with our customers, talking computer games, despite a phone call saying how gruff he was with someone.

Here’s what happened.
Saturday morning we were EXTREMELY busy. A huge drink order came in. People with children. Children are a known element in this business. We know they are going to act up. The unknown element is the parents. How will they handle their children? 90% of the time, parents are quick to handle their kids, and keep them in line. The other 10% of the time WE have to watch the kids, and make sure they aren’t wreaking havoc in the shop. (I once was scolded and called “mean” for telling a child to stop dancing on top of the table. Seriously)
In this case, a dad set his child on the counter. (and by sitting on the counter, her feet, dirty shoes and all, are also on the counter) He was then looking for the menu, which was under the child’s butt. Dill said, “The menu is under your kid, and actually, it’s not a good idea to have her sitting on the counter, board of health and safety issues you know”. So the kid is removed from the counter, order is being taken. Out of the corner of his eye, Dill sees kid jumping up and grabbing yarn out of the top of the yarn display. Say’s quickly to the child (while yarn is now on the floor) “You can’t play with the yarn, please don’t touch that”. Then goes back to taking the order.

Finally, order is taken, out the door they go, crazy rush continues for several more hours.

Today, I get a phone call saying that Dill behaved as if children weren’t welcomed in the shop. According to this customer, the kid had been on the counter for less than 2 seconds before the Dad was rudely asked to get the kid down, (according to the security video, it was actually close to 4 minutes) and child had barely touched the yarn before being snapped at not to touch it.

Luckily, we have security video, so I was able to watch the tape and see what really happened, but it’s funny how offended people get when you question their child’s behavior. I was informed by this person,(who wasn’t actually here when all this happened) that Dill should have said, calmly and quietly, “Look, it’s a silly board of health thing, but we can’t have the kid on the counter. I’m so sorry about that.” And while I most definitely take her suggestion into consideration, how about the SAFETY of perching a kid on a high counter? Or the fact, that watching the video, the kid was punching the cookies, flipping cards around, etc.

We expect a little bit of chaos from children. They’re CHILDREN. They’re going to be a little bit nutty, especially when there are two 300 gallon fish tanks, and cookies baking, and people everywhere, and music… we expect a little bit of madness. But it’s also not fair to us, or our other customers, to have kids standing on the couches, destroying product, or being in unsafe situations with no help from the parents in controlling them!

Look, I love kids. We love the kids that come in here too! (Dill even trades vending machine toys with one of our customers kids, Mary, who is one of the best behaved kids I’ve ever seen)
I’m not a parent, but I would have a couple dozen of the little monsters if I could. So I don’t know exactly how it is to take your kids in public. I do know that my niece and nephews are the smartest, best kids in the entire world. Seriously. my niece let go of her pacifier like a champ. NASA is standing by waiting to hire her as soon as she learns her long division. They are amazing munchkins. They’re also not perfect little saints when they go out in public. (Ironically enough, this is usually Dill’s fault, as he has been known to start impromptu wrestling sessions with my nephews). So don’t be embarrassed if your kid acts up in public. Handle it, and if an owner, manager, or worker has to tell your kid not to do something harmful to product (do you really want to pay for a $20 skein of hand spun yarn that your child destroys?) don’t get mad at them, they’re trying to protect their workplace and your child, all at the same time!

So Dill Her0, after reviewing the video, I’m not gonna write you up THIS time! But due to this complaint, you aren’t getting a raise this year.

Proof that Dill is the instigator in all of my nephews public misdeeds: 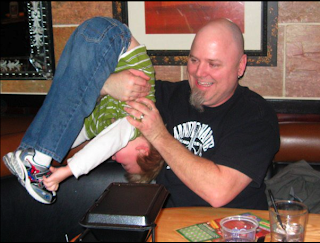 PS- let me also add I’m not mad at this person for complaining. As stated, they weren’t actually here to see what was really going on, and they heard it second hand from the person who was here. Things get kind of exaggerated sometimes, and they really were trying to alert us to what they felt might be a problem in our customer service. Just because I disagree, doesn’t mean I don’t appreciate what they were trying to do.