I am not normally one for plucking things out of strangers trash. Dill is. When we first moved into our neighborhood he found a stand up arcade game called Mercs. He took it, fixed it (the screen was black until he hit it with a screwdriver) and we spent a drunken cookout with many friends playing it.
Another time, we were driving and he saw a star wars cup teetering on the top of a trash can. He stopped the jeep, grabbed it, hopped back in and upon realizing it was a Jar Jar cup, scoffed and tossed it in the back of the jeep. A year later, we were going through a box and found the cup. Giggling like idiots, we drove back the the house he had gotten it from, and set it on their porch.
Once, Dill got me involved in his trash collecting. We were still new to the neighborhood, and as we were driving though, Dill spotted a really cool, retro style pink and purple bag. He did a u-turn, and told me to hop out and grab the bag. I started protesting, since the family who lived in the house were all sitting, having dinner in front of their big picture window. I did not want to always be known as the neighbors who went through others trash. He insisted, I figured it would be better to get it over with, and grabbed the bag. It was HEAVY! When we opened it, we discovered a pink bowling ball named Angie inside.

Yesterday apparently, it was my turn. The fates aligned for me to get the ultimate trash find. See, normally I drive a Honda Del Sol. A two seated, very teeny tiny car. But Sunday, we bought a minivan, and I’ve been driving it around this week to test it out. Then I took a wrong turn, and ended up on a different road than I normally take to go to the store, and saw THIS: 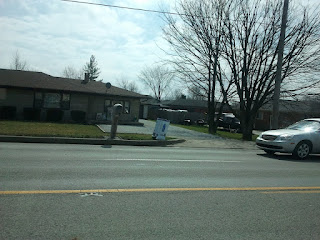 I called Dill and told him about it, and he started pleading with me to get it. After much hemming and hawing on my part, I made several u-turns and fought some wicked traffic to get to the driveway and R2. I felt weird just snatching it from the curb in broad daylight, so I knocked on the door. An older gentleman answered and looked a bit taken aback to find a flustered pink haired girl on his front step.
“I’m sorry to bother you, but are you throwing that R2 away”?
“Yeeeeessss” At this point he looked beyond baffled. I mean, it was on the CURB! Of course he was throwing it away!
“Sooo… I can have it”? I was kind of dancing from foot to foot at this point in excitement. He laughed, told me to go get it, and offered to help me put it in the van.

And now we have an R2, and I’m officially a person who gets into other peoples trash. 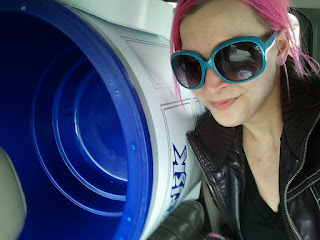 We’re thinking of turning him into a beer cooler, or a keg holder for the bar Dill is building in the front room. 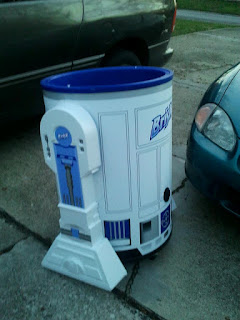 I wish he had his head, but I think we can get one built. I plan on harassing some of the guys in the 501st at my book signing tomorrow night about how such a thing can be done!