Am I the only one who feels like doing a dance after weaving in the final end on a sweater? I feel like there should be applause or something. In fact, (confession time) I realized this morning that when I finish a knitting project I smile and look around, as if expecting someone to be there and say “good job!”. Alas, I have no minions to do so.

Maybe that should be my next panel. I’ll just sit there and knit while everyone watches and at the end people can clap for me. “Hooray! Did you see that last ssk? And that bind off IN PATTERN… wow.”

Anyway, years and years and years ago I fell in love with a couple of patterns and never had time to make them. As the aforementioned minions aren’t in existence yet, I don’t have enough hours in the day to knit everything that I want to make. Throw in some book deadlines and there is very little knitting “just for me” that I get to do anymore. I don’t mind, I love the challenge of design, I love working on the books, but it does leave very little time for just hanging out and knitting, flipping through Interweave, or browsing blogs and websites like Ravelry. (not only do I want to avoid accidental influence, I hate looking through my queue and seeing all the things I WANT to knit!)

So, after the last round of edits for Geek Knits, which had me doing a week of all nighters, I had a little bit of down time. Well, not really, as I’m already gearing up for a new proposal, which I really SHOULD have been working on, more edits are probably coming soon, not to mention a pattern I’m doing for Knit Picks. So not down time, but time in which I didn’t feel as guilty procrastinating on actual knitting work.

I decided it would be fun to do 2 projects that I’ve been dying to do for years. The first, One Skein Wonder! Back in the days before ravelry, this pattern was floating around all of my favorite blogs. So a couple weeks ago I decided to finally cast on to make my own.
Three hours later, I had my shrug! It’s a cute, very easy pattern. Basic top down knitting with increasing! 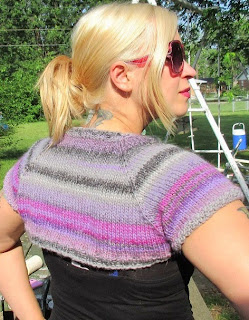 Next up, a sweater I’ve been dying to make for ages. I had the yarn sitting in my stash for forever, I’ve just never had a moment to bang this one out! A house sweater from the book, Charmed Knits! I was always a big fan of Alison Hansel and I really wish she were still blogging. I felt so incredibly cool when I was doing Knockdown Knits and realized we shared an editor and publisher at Wiley. Charmed Knits had a huge buzz and I was so excited to lean over my editors desk and see the ARC’s that were getting ready to go out as promotional materials.
The House Sweater jumped out at me right away. Finally, I set aside a little time to make one! 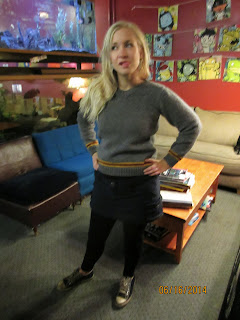 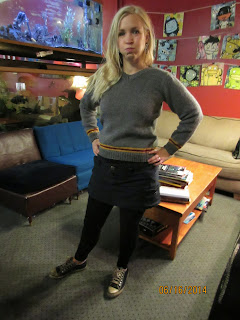 Don’t let the pictures lead you to believe that I’m anything but happy with my sweater! I just hate having my picture taken, especially first thing in the morning!

I’m going to make a few more, except in the round this time and probably with set in sleeves, also worked in the round. I’m not a huge fan of seaming and the seams drove me batty on this sucker. Also I will admit to probably not deserving the Gryffindor colors, as I’m a bit of a chicken shit. I’d like to be Ravenclaw, though that whole riddle thing to get into your common room would be a pain. I mean, I’m sure it’s fun most of the time, but what about after a long day of classes, then a study session in the library… wouldn’t your brain be a little too mushy for riddles? I’d probably be pretty happy as a Hufflepuff instead.

Oops. My nerd is showing again isn’t it?

For now, it’s back to working on “work” knitting. Getting some projects off to Mr. Kyle Cassidy for a photo shoot with some awesome librarians in Vegas. Then I’m finishing up a Knit Picks pattern which will be released in the fall and will be FREE! Because free patterns rock.