The other night we got the shocking news that Dill’s co-announcer Brownie, had lost his father in the night. At the age of 54 he had quietly passed in his sleep. Everyone was shocked, and it is a really hard blow to Brownie’s family.
Saturday we attended the viewing and Sunday the funeral. The funeral was full of tears but Brownie kept saying that his Dad would have wanted everyone at his house and having fun, so that is what he wanted everyone to do.
The funeral turned into a pool party, which ended with us racing chihuahuas in the swimming pool. (Brownie and his sister, have two of our dog Sassy’s litter mates). 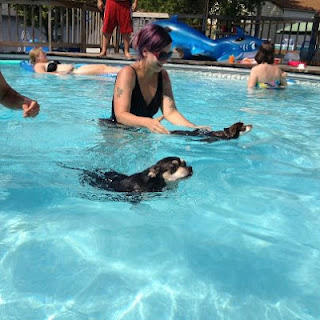 That’s Sassy with me, and her brother Hank with Brownie. Fat Izzy isn’t in this shot, I’ll post a video and some more pics in the next blog.

I can only hope that when it’s my time to go my friends remember me in such a hilarious way.

I left Dill with Brownie, so they could get drunk and laugh and cry. I was exhausted and knew that one of us had to be able to work in the morning.

It scares me to pieces to think that someone can just die like that. Go to bed and not wake up. Especially when that someone is only 11 years older than my husband, and 6 years younger than my mother.

Hopefully this is the last of my sad blog posts this summer! Trying to think positive thoughts, get ready for GenCon at the end of August, and get caught up on the massive pile of knitting in my bag!