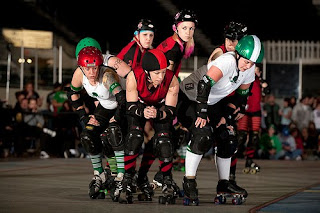 Lined up and ready for the whistle Photo by Marc Lebryk

*As always, click a pic to make it bigger!

The last bout of our 3rd season (last year) we suffered one of our most mentally crushing defeats. Ohio Roller Girls beat us by a handful of measly points. It was painful, painful, painful!
So this season, when I heard that we were playing them again, I was all ready for retaliation! They’re a great team of hard hitters, with a really solid defense. They had lost Barracuda this year, which I know had to be a blow for them as she is just an AMAZING jammer.
We came out this season as a whole new team. Our heads have been in it, our training has stepped up, we all do way more training on our own as well (Go me and my 50lb weight loss!!!!), it’s just been a brand new Naptown. We’ve spent all season undefeated at home, and while we had a close call or two, I have really believed that this season was ours! There were a few games that had me worried, Burning River (close, but we pulled off a very solid win) Memphis (great individual skaters, but they lacked our teamwork, and we blew them out) Sioux Falls (Our come from behind victory this season) and Ohio.
Due to sending Octokitties to Neil Gaiman all season long, we ended up going out to dinner with him the night before the bout. Which meant that when bout day rolled around, I was on this incredible high. I felt confident, happy, and just ready to kick ass. To celebrate, I wore my Neil Gaiman shirt that Cat from Neverwear sent me for pre bout practice! 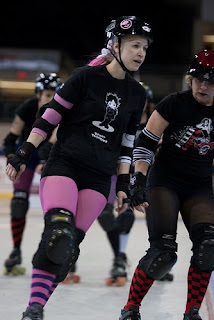 We hit the sidelines for the Belles vs. Gang Green bout. I’ve said it before and I’ll say it again, I’ll put our B team up against some of the A teams out there and watch them win! These girls scrimmage against us and kick ass! I think it took about 5 jams before any points got put on the board and it was all Belles for a long time. Furious first half, but we were confident the Belles had a win on their hands.
We hit the locker room for the second half to get game ready.
During our prep time, I could hear the roar of the crowd, which seemed to be getting louder and louder. I attributed it to everyone being excited by the Belles victory. When we were told to get out to our bench for the Sirens vs. OHRG All Stars game, I realized what was really going on. 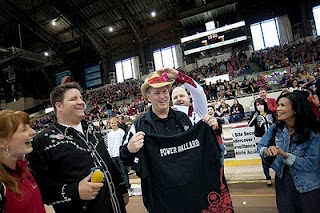 That’s Mayor Ballard. But look behind him. At the seats. FILLED. All over the place, filled seats! I have never, ever, ever seen us pack the Coliseum like that! It was so loud that I had trouble hearing the whistles!
I was out in the first pack, and from the get go we were hard hitting and moving fast. We were putting points on the board, but just a couple at a time. Each team had solid defense. We shut down OHRG’s jammer, and it took them a long time before they got their first points up there! 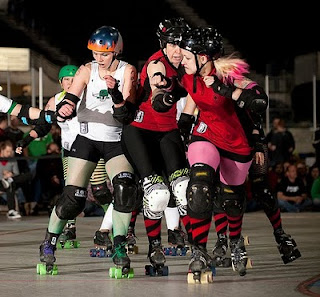 My friend Rusty nicknamed me the “Bitch Seeking Missile” for this bout. Photo by Marc Lebryk 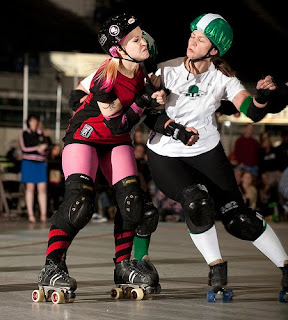 Marc Lebryk
By the end of the first half, I think it was something like 51 to 5 in our favor. That may seem like a lot, but believe me, in derby, that is not a huge lead. In our bout against Sioux Falls Maiden America put up 28 points in a 2 minute jam!
We went back out after the half and could feel OHRG’s rage. Their hits were hard, and they were frustrated. They got a few more points on the board, but they just could not shut down our jammers! At one point, I got tangled up in a pack of OHRG blockers and BAM! Felt this pain in my face as an elbow crashed into my chin. I saw stars, had tunnel vision, and heard the whistle of a ref sending me to the box. Holding my face, I skated over as quickly as I could, sat in penalty and realized that my jaw was out of whack! My face hurt, but my jaw was just uncomfortable. The best way to describe the feeling is when you really need your knee to crack. It just feels out of place and wrong!
Went back into the pack, was in for just a few seconds and was out again! What the hell? An NSO told me after the bout that they were even surprised, as I had only been in for about 30 seconds and had managed to accumulate 5 minors! So… either wrist slap on me or something got confused. Both scenarios are equally possible 😉
Back out again, half a jam and AGAIN! In penalty! WTF????
There was a time out, in which some jammer panty swapping shenanigans were discussed, and the head ref, who had just put me in penalty skated over to me.
“Who put you in the box”?
“Um. You did”.
“OOPS! My bad! Get back out there”!
Heehee. I kind of love Dr. Vroom. She might be a Zebra, but she’s pretty awesome to own up to her mistake!
Jam started up, and again, hard, crazy hitting from all sides. Jammer shut out after jammer shut out. Ohio managed to put more points on the board, but the final score was still 133-34 in our favor. Such a huge difference from last year!
There was hugging, and screaming, and I just burst into tears. There were of course, photographers all over the place, so I kept trying to bury my face away from them, but they totally caught me in all my snotty, blurry eyed, sobbing glory! I have never ever felt the need to cry after a game before, win or lose, but this had been such a perfect weekend. I met Neil, we had a winning home season, and I am just so in love with this sport, and these girls who sacrifice so much to do this crazy thing that we do, and these fans who support us, and pay to come to our games… it was just overwhelming! 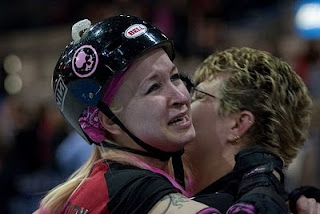 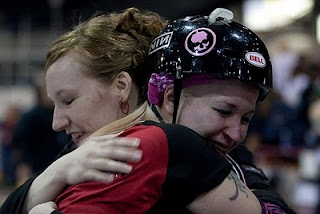 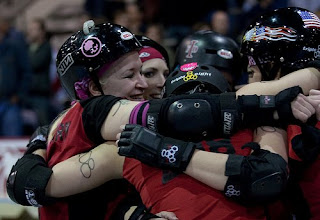 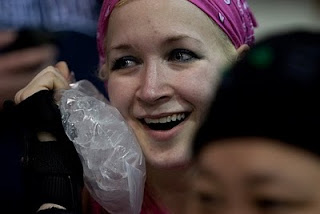 Normally, I hang and do autographs the whole time, but I got through just a few before the adrenaline started wearing off, and my jaw starting throbbing. I am so very sorry that I didn’t hang and sign for everyone like I normally do, but I needed more ice and painkillers as quickly as possible.
Once I hit the locker room, I realized that if I did in fact, take painkillers, then my empty stomach would probably protest. I tried eating a piece of pizza, but there was no way I could chew. My brilliant solution? Get to the after party and drink as quickly as possible! That sounds like a great solution right???
Yea. I ended up drunk after two gin and tonics and with my jaw hurting more than ever from jumping around and dancing. So it was a bit of an early night for me!
I have NEVER seen the after party that packed. Or that many skaters without their shirts on for that matter! (No, you will not see those pictures, yes, everyone left their bras on and NO I won’t tell you who did it)!
Some after party pics! 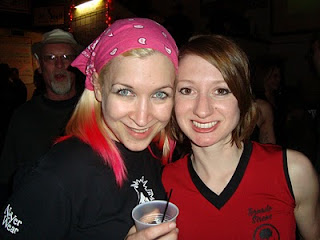 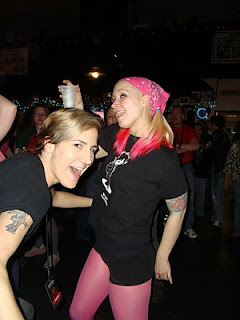 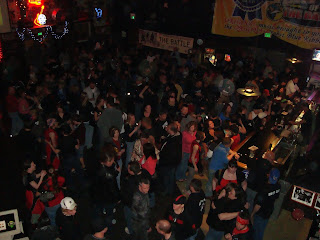 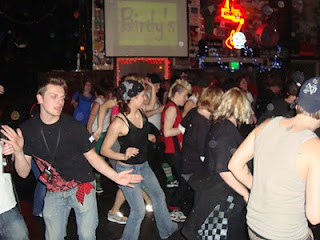 A couple of bonus pics from tom Klubens. A fun jammer hit and Booche with her gun show! 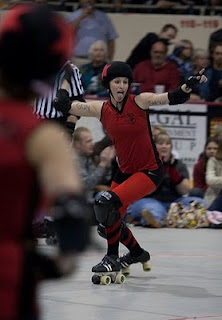 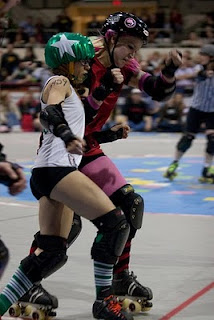