So if any of you actually see me in real life, you know that my hair is freakishly long… and I’m told, causes flashbacks to playing with My Little Pony dolls. (due to it’s pink, white, and blond hues) 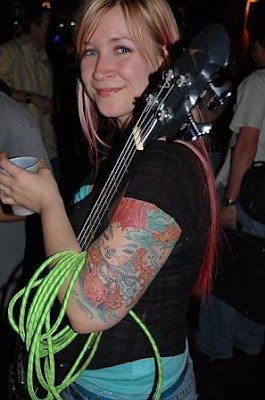 Anyway, imagine waking up at 4ish every day. Now imagine either working until 4pm, then going to roller derby practice where your hair needs to be out of your face and off your back (so your number shows. Oh, and ponytails are out of the question, due to your helmet) until around 9pm. Get home at 930pm, eat dinner, take shower, crawl in bed at 1030 or 11. Wake up at 4ish again the next day, and either repeat, or work until 8pm. Resulting in a 930 or 10pm bedtime. Meaning my hair is either tied in weird oragami knot thing on the back of my head, or covered with a bandanna, or both, 90% of the time.
I have now made the decision to cut my damn hair. I know.. it’s long. It’s pretty… yada yada yada. It is also a big pain in the butt to take care of, and no one ever SEES how long it is since I wear it up and out of my way all the time.

Which means… it is find my picky ass a cool hairstyle time! Last time I cut my hair (over 2 feet of it!) I made a BIG HUGE MISTAKE, but I learned from that mistake. I learned, that cutting your hair like Shannyn Sossamon does NOT mean you will lose 40 lbs, get an olive complexion and have big doe eyes. It instead, means that you will still look like a slightly stocky pale blonde chick with really short hair!
So this time, I need to ignore what the chic with the haircut looks like, and actually focus on the darn haircut!
Now here is my dilemma:
As you all know, I like the Twilight Series. (for an explanation of why a former English Lit/Womens Studies major is obsessed with Twilight, see Cleolindas post about twinkies and Twilight) As those of you who have read Twilight know… Alice Cullen is the most badass of the bunch. I love her! If you haven’t read the series, once again see Cleolinda, and read the recaps. 5 words, Psychic Teenage Vampire Slumber Party. Alice is full of the awesome.
That brings me to my question, do I want the movie version Alice Cullen haircut because it’s ALICE CULLEN, or is this actually a cute, low-maintenance hairdo for yours truly? 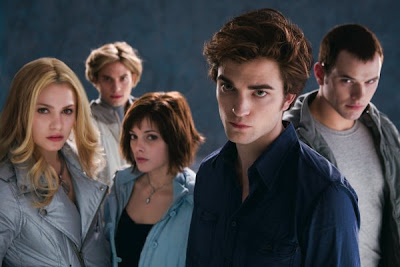 Alice is the one in the blue, with the brown hair. And I would have to get that haircut sans bangs, because I suck at bangs. It takes me a month to find time to get to the salon, and I end up getting frustrated and cutting my bangs with my knitting scissors and no mirror. Needless to say, I do not do a very good job…

I also considered the Posh bob, but Dill Her0 is not a fan of the stacked in back hairdo. And Posh looks like an alien…