I don’t talk about Hillbilly Kitty a lot on this blog. He has always been very much Dill Her0’s cat. When Dill sits on the couch, Hillbilly sits on the arm of the couch and places his paw on his wrist. At night he attempts to suffocate Dill by laying on his chest.
Hillbilly had a shit life. Beat up, kicked in the head, lived under a couch for 7 days, this cat was a mess. Dill rescued him from that, and Hillbilly has been his kitty ever since.(almost 16 years) Hillbilly would bite other people, cause havoc around the house, and be a general jerk to live with. Dill adored the hell out of him.
About 6 years ago he was diagnosed with diabetes and we were told that we would maybe have him for another year. Insulin shots twice a day seemed to regulate him pretty well. (And thank goodness for one of my derby sisters, who would occasionally hook us up with insulin, as that stuff is EXPENSIVE)

Labor day we were off work. Hillbilly jumped in bed for a cuddle and to demand some food. We nodded off back to sleep and were woken about an hour later by terrible yowling. Sounds I have never heard a cat make before. We found Billy at the foot of the bed on the floor having a seizure. Dill picked him up and he was totally limp. We gave him his insulin, started putting sugar water into his mouth, and called the vet. Of course it was a holiday and they were closed. It took us 30 minutes to find an emergency vet that was open, and in that time Billy had another 7 seizures. He never came back to, was completely unresponsive, and screamed and yowled during each seizure.

We took him to the closest emergency vet which was in Beech Grove. We’ve used them before for Sassy , and I was VERY hesitant to use them again, based on that experience. (If you don’t want to click the link and read the other blog entry, the short version is that they told me to bring in the dog when I didn’t need to, and it cost me almost a grand for a 4 hour vet visit and an x-ray)
However, when your cat is seizing and yowling and screaming in the car, you go to the closest damn vet that is open.
I really, really, really wish we hadn’t. Because what followed is the absolute WORST experience I have ever had with a vet, and I don’t know that I will ever shake the guilt I feel for taking him there.

After the vet had seen Hillbilly, she came out and told us that they would need an emergency deposit and that Hillbilly had another seizure in the back. (Including the car ride this brought the seizure total up to about 10 in less than an hour) Fine, whatever, here’s the credit card. Then she tells us that she thinks Hillbilly had the seizure because he’s probably not diabetic anymore and when we gave him his insulin, it caused the seizure.
1) I doubt if our cat was magically not diabetic anymore. (It CAN happen, but it’s so incredibly rare, and Billy was still showing all the signs of a diabetic that weekend)
2)We gave him the insulin AFTER the seizure. I explained that to her several times.

Me: What do you think is causing these seizures?

Vet: Well, sometimes cats aren’t diabetic anymore, so I think that when you gave him the insulin, it caused the seizure and now…

Dill: (interrupting)We gave him the insulin AFTER the seizure. We told you this. Seizure first. Insulin after seizure.

Vet: Well, yes, but it could still be that he’s not diabetic anymore.

Me: What are his chances of surviving this?

Vet: Well, seizures aren’t good. It could be a blood clot in his brain.

Me: So we could spend this money, stress him out (Billy did NOT board or kennel well. He would throw himself against the cage, not eat, not drink, etc) and have to put him down in the end?

Vet: Yes, but (and at this point she turns to Dill, who is crying) but you could have your kitty for a few more years if all goes well!

She kept doing that too. I was being the harsh voice of reason, Dill was upset, so she would turn to Dill for the optimistic sales approach. In probably five minutes, she would tell us at lead three times that Hillbilly might not be diabetic anymore and that the seizure was caused by the insulin. We would AGAIN have to remind her that the seizure came first. Finally we asked to go back and see the cat.

He was lethargic, non responsive, and a vet tech was petting him. For those of you who knew Hillbilly, you know this is not normal behavior. You DON’T pet Hillbilly. He will bite your face off if you try. Very few people can get one or two strokes in before he yowls and attacks them. Dill is the only person that could scoop that cat up and love on him.
We both looked at him, looked in his eyes, and knew it was time. He wasn’t responsive, he looked absolutely miserable, and we decided to let him go.

We ask the vet if putting him down is our only other option, and she says yes. Then asks us if we would like to pay a little extra for a private room and some alone time with him. Dill said no, let’s just get this done.

So he had to say goodbye to his buddy of the past 15-16 years and I was left SEETHING. I paid the bill and one staff member pulled me aside and said,(after looking around to make sure nobody heard her) “You guys made the right decision for that cat, it’s what I would have done”.

I felt like we went to a used car dealership instead of a vet. I left feeling sick, and thinking that if we had just taken him to another vet, Hillbilly might have survived. ( I know now that this is not true, after talking to another vet, who told me she would have immediately talked to us about putting Hillbilly down)
I can’t accurately describe how she just wouldn’t listen and how horrible her bedside manner was. I feel sick that our kitty had to be there and that he suffered for longer than he should have.

I am however, glad for one thing. A friend summed this up best:

“If Hillbilly had to die, I’m sure he would have wanted it to be on Labor day, so he could totally screw up your day off”.

Now our house, despite still having 2 cats, a dog and a bird, feels EMPTY. The numbers in the Dark/Her0 house are dwindling. I’m hoping that Vega, my 16 year old kitty, decides to hang on for at least a few more years. I can’t take much more critter loss. 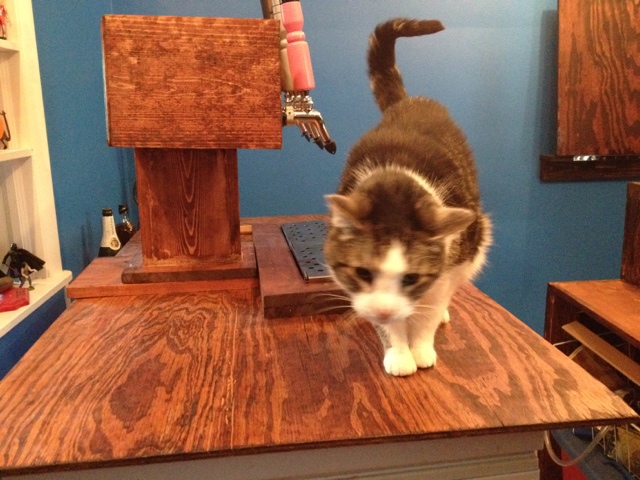