After weeks of struggle, I finally got my butt out to the barn to go riding! It’s been a constant battle of taking a couple hours off, only to have the sky open up with rain!
Since my horse is a little guy, if I want to ride I have to depend on the kindness of the barn people. Yesterday I got to ride Classic, whom I LOVE! He’s a bundle of energy. From the second I get on and say go, he’s all, “OMG! Yay! Riding! Let’s go fast! Can we go fast yet? Is it time to go fast NOW? Hey what’s that over there? Let’s go FAST and check it out!!!!” 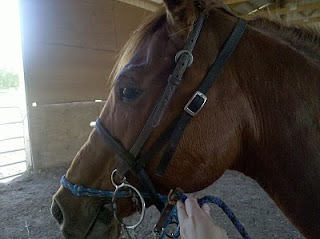 Since it was still too muddy to go outside, we did lots of controlled trots and canters indoors, which was not the FAST that Classic likes to go, but after about 30 minutes he had settled down.
After a couple hours, when I started realizing that I had derby practice the next day, and my calves were already killing me, I cooled him down, and went to put him in the cross ties to take the tack off and brush him.
When we had our “WHAT THE HELL IS THAT THING”?? moment.
See, even the calmest, sweetest horse, has that moment when a leaf, a plastic bag, or the same bucket they have seen every single day for years freaks them out! All of a sudden the leaf is a bloodthirsty dragon, the bucket is an instrument of torture, etc.
Classic had that moment when I went to clip the second half of the cross ties onto his halter. Eyes rolled back in the head and he BOLTED! Pulled out of the cross ties, saddle still on, martingale dangling and he took off! Luckily, I had closed the main gate, so it was only a few minutes of chasing him around the indoor ring. But still. My yell alerted everyone else at the barn, who already eye me suspiciously due to the pink hair, tatoos, and insistence on posting when I trot.
I caught Classic quickly and safely, got his tack off and put him out with the other horses, where he told his story of the big scary THING that almost got him, but he was quick enough and strong enough to get away! 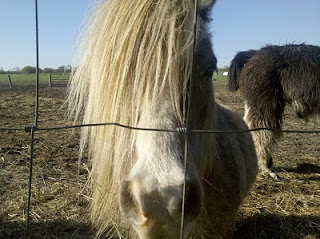 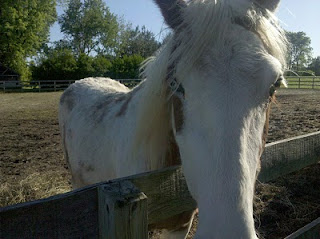 This is Bella, who is green broke and beautiful. I love her lots.

I’m going to try and get out again as much as possible in the next couple weeks. Classic is being GIVEN AWAY and won’t be at the barn anymore. He’s the 3rd horse to leave this year. Unfortunately, with the economy getting bad, horses are one of the first things people get rid of. The auctions have been beyond crowded the past few years, with more horses than buyers. I WISH we had enough to afford boarding another horse, but we just can’t right now.
Hopefully it’s dry enough before he goes away to get outside and GO FAST at least one more time!