We had Very Big Plans for day three of our adventure! We were going to go skate with the Madison Roller Girls! Not only did they invite Jane and I to scrimmage with the Dairyland Dolls as they prepped for Nationals, they also invited us to participate in their league practice!
We stole Lorraine from her boss, and took her with us to derby day! She watched as we practiced for hours and hours! It was SUCH a great practice too! The Mad Rollin’ Dolls have this great energy that you can just feel when you walk in! They were amazing to skate with, and really, really nice. I have a derby crush on them now.

After the official practice, we stayed for the open skate with Lorraine! She did great! This girl could turn on her skates, and every time she started to fall, she crouched and got low instead! She is going to be a demon when she gets her skills up! 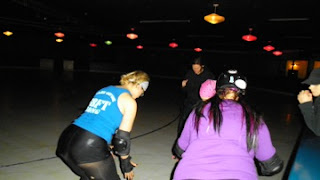 I seriously hope that I get to skate with these girls again sometime. I felt like I not only learned a lot, but it was a great confidence boost to skate with another league and do pretty well! It was very “freeing” to not be stressed about a roster and just have FUN! Ironically, I felt like I was skating better since I wasn’t stressed about a coach watching and judging me!

After that, we went out with Allie for FOOD!!!! Then it was back to Neil’s who was by now on a plane to see the Dresden Dolls, but graciously didn’t mind a bunch of people taking over his house!

We hung out with Dan Guy, Jounie, Kitty, Lorraine, and the dogs, Lola and Cabal and watched The Walking Dead!!!!!

During that, we got an email, with a video, from our Tip Gnome at the coffee shop. Alarmed, we played it to see what the heck was going on with our employees!

Unfortunately I can’t embed the video here, but you MUST click this link and watch it.

We were a bit zombified ourselves, so it was an early night for us!

Edit! Haha! Dill uploaded it to youtube for me!