After often being amazed by the works of totallee.net and Todd Paschall I decided to see if I could work multiple colors in crochet to create kick ass pictures.

I’ll admit, I’m not the best when it comes to crochet. It was the first fiber art that I learned how to do, but I quickly abandoned it for knitting. I think crochet is awesome, but I can knit and not look at what I’m doing. I can read books, watch movies, etc. With crochet, I’m always having to look down at my stitches, and I get bored.

So, despite being let’s say, not the best crochet artist in the world, I decided to tackle the picture crochet idea. I wanted to make this incredibly cool blanket for Lorraine. (For those of you noticing the Neil and Amanda bit in the title, sit tight, I’ll get there) I picked out and rejected photo after photo. Made graphs, patterns, charts, bought yarn, started, cried, tore things out, pulled out bits of my hair, you get the idea. The Lorraine blanket is extremely complicated, so I decided I needed a practice blanket first. As many times as Neil has let me crash at his house, chase his dogs, and fill his bedrooms and libraries with roller girls (Not to mention not minding that I talked his assistant into joining roller derby, which I’m sure makes her schedule a little bit more complicated than it used to be) I figured I owed him a present.

I always liked the pictures he and Amanda used as their engagement photo, so I hunted down one of those. (I love you interwebs)
Photographed by Allan Amato

The actual Crochet by Numbers technique that Todd Paschall uses involves lots of counting. I decided to use my good old reliable graph method.

Erm, which, due to the size of the project, meant that I had to make a GIANT graph! 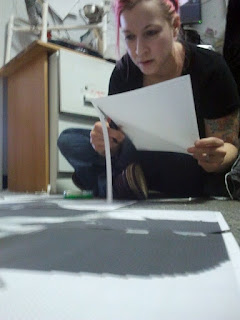 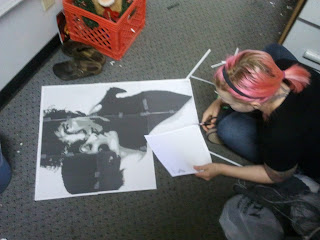 Pulling all the ends through isn’t exactly fun… I cursed Neil and his wild hair quite a few times, as it involved lots of one stitch color changes. Here’s what the back was starting to look like. 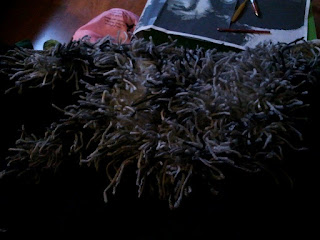 Oddly enough, to me this thing looked like shapeless blobs… until I took a picture: 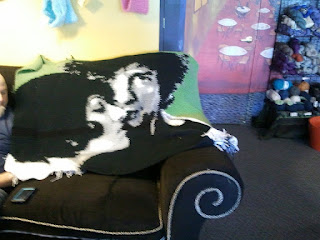 Of course finishing it meant… SEWING! Argh. Couldn’t leave the back looking like this though: 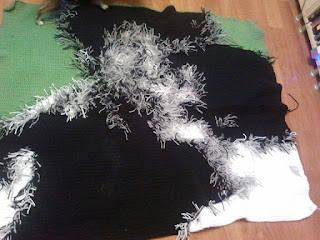 So, I sewed a super snuggly fleece type back on. Lenore the cat approved: 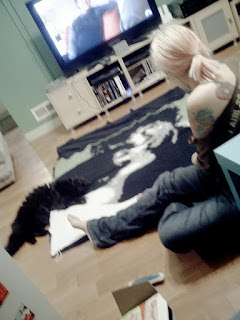 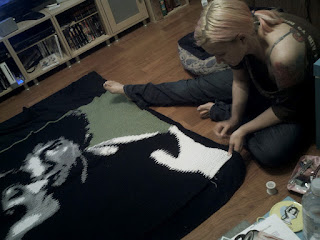 And finally, the finished project:
(okay, lies, I still need to seam a bit on the top, but this is my only chance at posting this blog today) 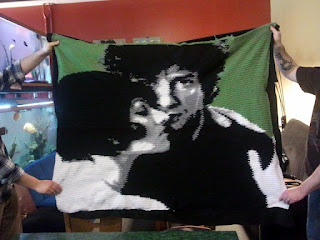 About 2 weeks to complete (including a couple frogs-tearing out your work for you non-fiber people) and around 35,000 stitches!!!
Yay! Finished present! It’s not perfect by any means, but I’m pretty happy with my first attempt. Working on the Lorraine blanket now, which involves about 5 panels, at around 18,000 stitches per panel. It will keep her warm in the frozen north at least!