Ugh. Just when things are going well, off goes the google alerts! Turns out that a couple of derby skaters are using the name “Joan of Dark”. My name has been trademarked for a long time. As soon as I started publishing under my alter ego, I knew it had to be protected.

Of course, not to toot my own horn, I’ve been lucky enough to be pretty public in a very good way. So anyone even thinking of picking up the name Joan of Dark, just needs to do a quick google and they would see me all over the place… or so I thought.

Then I get the alerts to my phone, hey! Derby girls! Skating under Joan of Dark! That’s not cool! First thing, send emails. Because lawyers are expensive. As of this minute, one of the girls has not responded. The other… well, the short answer is that she said no. She actually said changing her name would cost her money and that would be “silly”.

If you aren’t familiar with how trademarks work, if you don’t protect it, you can lose it. Which means I have to spend MY money on my lawyer to protect it for me. Which frankly, is really crappy. Believe it or not, being a knitting author and cafe owner doesn’t have me rolling in money.

Not to be all “get off my lawn” here, but this whole situation sucks, and it sucks that this skater can’t just be sensible about it. Instead, I’ve got to fight to protect what I’ve been building for over a decade. And from what I’m hearing from Dill Hero’s announcer friends and WFTDA officials commenting on the situation, it’s not just my issue, it’s happening all over with a new generation of skaters not respecting classic names, especially moderate to really famous classic names.

So cheers to legal fights and derby drama! 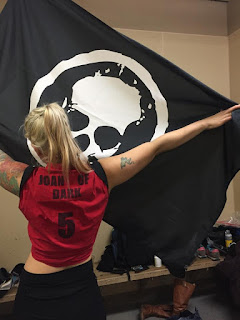 * quick edit. For those of you that have messaged me saying “ask her nicely! Surely she’ll understand!” I did. Her one line reply? “I think my new derby name will be Toni Carr;)”. So no. No reason here. Also I miss old derby where we were all bitches but we were bitches in this TOGETHER.