About twice a year, a spike happens in sales for my first book, and I start getting questions on Ravelry and through email, so I thought I would put up a little blog post!

As many of you know, Knockdown Knits: 30 Projects from the Roller Derby Track

was my very first book. (If you’re local, part of my talk at Pop Con this Saturday will cover how I got published.)

I was lucky. Even though Wiley is a historically conservative publisher, they gave me a lot of freedoms, such as letting me use my team, the Naptown Roller Girls, as the models.

Of course, there were some points where the conservative publisher leanings became evident. I wanted this picture in the book: 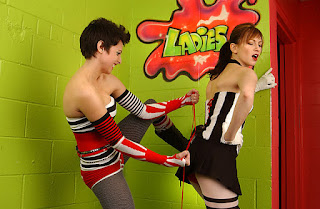 And with much fluttering of their hands the publisher went with this picture: 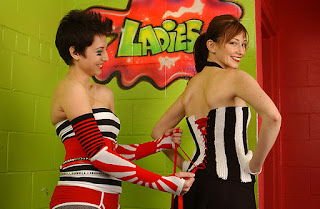 Which of course, is an awesome photo, so it wasn’t the worst thing in the world. And honestly, I didn’t realize it at the time, but for a publisher to let me come to the office, sit down, and pick out the photos I wanted for the book isn’t something that happens to every author.

Although there’s a lot I would love to change since I’ve grown as a designer and writer over the past decade, I also kind of love it as is. This little glimpse into the early days of roller derby (I think in the section talking about derby, I mention how there are “almost” 100 teams around the world and “almost” 30 WFTDA leagues!) is pretty fun.

I’ve had requests to do another one, and I’m not saying it’s outside the realm of possibility. I have a couple of other projects that have to get finished first, but revisiting a derby knitting book would be a good time. Of course, if I do it again it would definitely involve more leagues than just NRG, especially since the requests I’ve done to do another come from knitting derby girls in other states who have their own pattern ideas.

And a quick note to say that when Knockdown came out, I think I was one of TWO books about derby available. Now, there are a LOT more!
Here’s a list:

I just read this one,
and it was so dang cute I got teary eyed! I seriously love it.

And hey! I’m in this one! Screaming my head off at a ref I think.

Anyway, I thought I would put this blog up in response to my most recent question about Knockdown. Speaking of which, if you ever want to get in touch with me, comment here on the blog, or use the contact link on my site. (Or find me on twitter, facebook or instagram!)