Those of you that know me, know that I am PASSIONATE about my animals. And other peoples animals. And random animals, stray animals, animals on television… whatever, I have a problem.
Lately, due to the economic downturn in Indiana, I’ve seen lots and lots of animals lose their homes. Horses, cats, dogs, and birds. I’ve also recently been talking to the Fabulous Lorraine. Who is fabulous. And rescues some amazing kitties. You should go talk to her about them. They need homes, and she can hook you up. If I didn’t already have a gazillion animals, I would have one of those kitties.
Speaking of gazillion animals, I thought I would, one by one, introduce everyone to the “kids”, through a series of blog posts, and tell you how they came to live with me. So let’s meet Ernie!

Ernie had a sad story. His name used to be “Moo Moo” which in itself is a cruelty I think. One night his house caught on fire. The family got out, and when a fireman asked the family if everyone was safe, they said yes. Then the fireman heard the dog barking, rushed in, and snatched him up. He gave the family their dog, and they left. It wasn’t until a few hours later that the fireman realized that the dog he had saved was still sitting in the yard.
He called the family the next day, to tell them they had forgotten their dog. They responded with, “please drop him at the pound” The fireman WANTED to keep the dog, but he was incredibly allergic. So he dropped this cute, soot covered, hair slightly burned dog at the local animal control.
They cleaned him up, for the most part, there was still some soot, but overall he was okay. But BOY was he a scared doggie! A high school volunteer loved him so much, and renamed him Ernie, after the fireman who had pulled him out of the fire. She begged her dad, her mom, her grandparents, ANYONE to let her take Ernie home. They all said no.
So the day came when Ernie was going to be put to sleep, since there wasn’t enough room in the shelter. The girl called Ernie’s family to make sure they didn’t want their dog (they didn’t) and then, legend has it, she threw a tearful pleading begging ranting tantrum, swearing up and down, “My Dad can be convinced. Give Ernie one more day”!
But her Dad really couldn’t be, and after postponing it for over two weeks, the head boss of that animal control came in, and put his foot down. Ernie had to go.

Then I came in that shelter.

I asked the staff if they could pretty please bring a smallish dog up front because I couldn’t bear to go in the back. They said no, I had to go to the cages and look for myself. So I did, and bawling my head off, noticed one little dog that was just cowering in the back of his cage, and didn’t come up when I walked by. My friend Mike was with me, and he stopped and called to the little dog, who, shaking all over, came up. We got him out of the cage, and he sat on my foot, looked up at me, and I swear to every higher power, he was just telling me, “Please”. I hadn’t 100% planned on getting a dog, so I asked one of the volunteers if I could come back the next day and walk this dog around a little bit.
She looked at me and said, “I’m not trying to hard sell you, but Ernie has until 3pm today. So if you want him, it has to be now. If not, there are lots and lots of other dogs that you can walk tomorrow”.
So I clipped a leash on him, walked him to the front, filled out the paperwork, and they let me take him home, telling me he was a Yorkie, and that a girl would be very happy when she came in later that day.

Two days later I got a slightly hysterical call from the animal control, saying, “look, I know this is strange, but can you take a picture of Ernie with today’s paper and mail it to us”? Which I did, since apparently the nice volunteer girl who kept Ernie around long enough for me to find him didn’t believe he had actually been adopted. I happily sent a Polaroid picture of me, Ernie, and my mini horse, and a separate picture of Ernie sitting on that day’s paper and mailed it off. I received a very sweet, tear jerking card thanking me for saving “her” dog, and telling me that he was special. Ernie, who I have been informed, is not a bit Yorkie, but most likely a lot Corgi, IS special. He’s been my little buddy since 1997, and is now somewhere around 16 years old. Still acts like a puppy, just a little bit slower these days. Though I can still talk him into the super fast crazy puppy run, and he will sit pretty, play dead, and hi-five for a cookie.
I don’t know about his life before me, just that he’s always been afraid of men, and he used to pee himself if anyone so much as raised their voice. If you yelled at him, he would pee, shake all over, and cower in fear. So I’m guessing that not very good things happened to him before fireman Ernie pulled him out of that house. 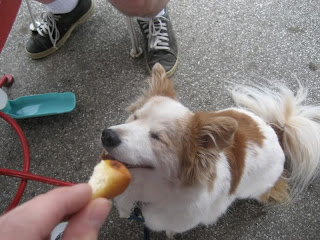 Ernie (Whose full name is now Ernest Rugby Wilkinson Carr) has been my best friend, and I wouldn’t be the person I am today without him in my life. So if you have room in your house, and you want to fill it with a little more love, think of your nearby shelter, or local animal rescue. Somewhere, really close to you, is another Ernie, who might only have a little time left, and is just waiting for you to clip on a leash, and take them home.