I’ve been kind of wishy washy about getting another dog since Ernie passed. My animal loving side said, “Hell yes! You have room! Save another!” We tested the waters by fostering a dog, and it was just a complete disaster. The dog sweet, but bananas (He was around 6 years old and apparently had NEVER lived in a house. Tore our place up, howled and scratched and cried 24/7 to be outdoors) but every time I looked at him I burst into tears. He made me miss Ern too much.
We got him fixed, shots, and sponsored his adoption, (making him totally free to anyone who wanted him) so within two days of us decided not to “fail foster” (adopt our foster) he had a new home. With a fenced in yard, where he could be an outdoor doggie.

Finally, last month I decided that it was time. Contacted corgi rescue here in Indiana, went out, met a corgi puppy, fell in love. We were told to get a name tag with our phone number for the dog and to have a check ready. (Made out to the woman running corgi rescue as an individual, not to an organization, which… red flag). She put the puppy in our arms, looked at our back yard and went, “Guys, I’m just not comfortable with you not having a fenced in yard. This puppy doesn’t know how to walk on a leash.” Plucked the dog out of our arms, and left. I was totally heart broken, and for the first time in my life, understood why people just decide to BUY dogs and puppies. Some of the people that run rescues are nutters.

Then last week, found out that All Herding Dog Rescue had a corgi. I decided you know what? Let’s try this thing ONE more time. Then I was going to be done with rescues. (alright, knowing me, done with rescues for a week or two before I tried again. But seriously, I was emotionally exhausted by this point.)

They contacted me, asked if I could come up Saturday and meet Willie, a corgi puppy. My Dad offered to drive me up, since it had been ages since we’d had a road trip together, and Dill was going to be busy that day, so we grabbed Sassy and headed out.

This rescue was an amazing place! Saturday was obviously a busy day for them, I saw two adoptions go out, then two intakes come in. (Isn’t that always the way???) There were horses, dogs and noise everywhere, the occasional cat streaking past, and… out came Willie.

A cute, bouncy bundle of corgi energy! He jumped, pulled on my boots, Sassy’s leash, my tights, a piece of straw, etc. SUCH a cute puppy. Couldn’t do anything except take him home!

It took him about two seconds to pass out in the back seat. 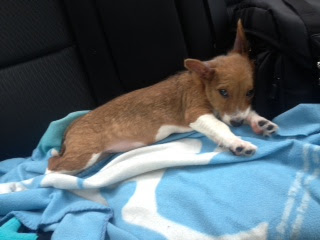 By the time we got him home, he was ready to PLAY!!!

(My favorite bit is around the forty second mark, when he starts bouncing)

We’re only on day two of a full day, but so far we’ve only had two accidents! One in the kennel, and one by the front door. (Pro tip, when puppy is by the door, it isn’t because he’s curious about the door, it’s because he has to pee!!!) He’s doing so well already! We have to watch him like a hawk though, as everything goes in his mouth. Rubber duckies, pen caps, shoes, socks, EVERYTHING. Puppies are cute, but goodness they’re a lot easier to handle when they’re adult dogs!!!

There you have it, we are once again a 2 dog family. Big adjustment, trying to fight my feelings of guilt about getting another dog after Ernie. It’s especially difficult to open up for that kind of inevitable heartbreak again but I think that, in the long run, I’m going to be happy that I did.