We made sure to mingle with the library people ourselves, and discussed the possibility of Naptown doing some fundraisers for them. One idea that we LOVED involved having some of us read books to the kids!
Listening to Neil
Then we went to the event, where we had some lovely VIP seats and listened to Neil talk, read stories, and answer questions. He was funny, taught us all what a “clap trap” was, (which Dill used the next night at the roller derby) and we had a great time!

Eating Dinner With Neil
We went back to the hotel, where we waited for Neil. Jocelyn and I were trying to talk some of the girls into jumping into the pool while we were waiting, when, probably luckily for us, Neil showed up to go out to eat. There was a brief discussion on how to get him to the restaurant, (he looked slightly alarmed when I mentioned that he could ride bitch between Jocelyn and I) when it was decided that the family of Debauchery would take him. This was probably the best thing ever, as Yeats, the child of Debauchery, is a HUGE Neil Gaiman fan, and according to Mr. Debauchery, Neil paid tons of attention to him in the car, answered questions, etc. They were all thrilled.
At the restaurant, we were joined by Kerri and Valerie, who had apparently been at the bar having drinks bought for them by a man who thought they were hookers. Lovely.
During dinner, Neil was again, super freaking nice. He talked about bees, writing, travel, and… Amanda Palmer.
Neil on Amanda
For a second, I thought that I had stuck my foot in my mouth by asking Neil how he had met Amanda. As soon as I said it, I panicked and was like, “ahhh! That’s really personal”! I tried to apologize, but he actually waved me off and told us all the whole story. Which was so sweet, and lovely, and had every girl at the table sighing at the way his face lit up talking about her. This seems really, really wrong to say about a distinguished, British, IMPORTANT WRITER PERSON, but holy hell, he was so freaking CUTE when he talked about her. Adorable even.
Neil on everything else
We spent hours talking, drinking and eating. He talked with everyone about bee keeping, music, Dr. Who, Big Bang, his library, and our insidious plot to kidnap the Fabulous Lorraine and take her to the roller derby. (It is so going to happen)
As we were leaving, I had to go up to him and geek out. I thanked him, told him that him meeting up with us was beyond nice and amazing, and I was extremely grateful. He said that if my emails hadn’t been nice, funny, or had they been the slightest bit insane, this wouldn’t have happened. Which took me a little by surprise, since my emails involved telling him that I was sending him stuffed Octokitties to ensure that we win derby bouts, so what does an insane email look like???
But all in all, it was the most wonderful evening! All weekend I’ve just been like, “that didn’t REALLY happen did it”? but I’ve been assured by others that it did.
To cap off the perfect weekend, we won our last home bout of the season. I took my jaw slightly out of socket doing it, and all the photographers managed to catch a happy sobbing emotionally drained me at the end of it, but that is all for the next blog post.
Perfect weekend all in all.

Pictures to prove to myself that it did happen. 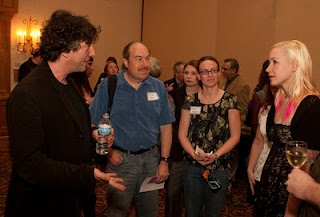 This was at the meet and greet. I think the look on my face is totally perfect! 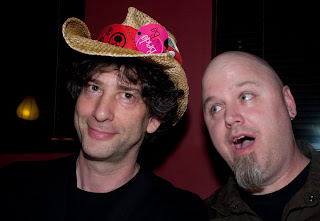 Dill gets people to wear his hat in pictures. It has it’s own fan page on facebook. My husband is slightly insane… (the next night he got the mayor to wear it at the derby) I love that Neil was such a good sport about it! 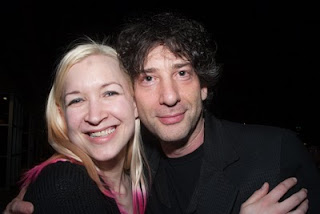 Sigh. I promised myself that I would not look like an idiot in a picture with Neil. Big ol’ cheeseball grin here though. Oh well…