As a lot of you may know, Kyle Cassidy is doing a roller derby portrait project that will hopefully be a book. So far the photos have been amazing! Dill, my friend Razor (the amazing sock designer from Knits for Nerds) and I drove almost 10 hours to go hang with Lorraine, Kyle, and CVRG to not only see a CVRG bout, but to see Kyle take some of these incredible pictures.

Lorraine told me, “Bring skates! Kyle will take your picture”! and I though, “Cool”. I packed skates, outfits, LOTS of make up, everything I would need to look pretty and cool on camera. I wondered what Kyle would have me do? Climb a tree? Bounce on the trampoline (which I did, but that was without skates actually. In fact, that wasn’t me. That was Joan of Drunk, and that’s an entirely different story)or maybe just skate down the road and look awesome!

So we arrive, and things are in full swing. Dill immediately gets drafted into holding photographer THINGS. It’s what he does when there are photographers around. He always ends up holding lights, or those reflector things, or just opening beer for the photogs. There was a little downtime between photos, and Kyle turns to me and says he wants to take my picture.
Um. Erm. No make up? Close up of my face? 10 hour CAR RIDE??? Eep.

I don’t consider myself incredibly vain, but I am very, very sensitive about the way my face looks. I was in a pretty bad car wreck as a teen, which resulted in multiple scars, teeth implants, a chin implant, bone grafts,a nose job, and a long, dark time as a teenager in a small town being called “scarface”.
Many, many surgeries later, I still have lots of insecurity about the way my face looks. Logically, I know it’s not as bad as I feel like it is. I look in the mirror, and I see the way my lip twists, my nose isn’t the same nose that the rest of my family has, my fake teeth look strange compared to the real teeth, and the scarred side of my face is skewed compared to the other side.
Other people look at me and see a not unattractive girl with colored hair and blue eyes.

I know far worse things have happened to far better people, but still, we are all human, and we all have our issues.

So when Kyle said that he wanted to take my picture as is, my heart started pounding, I tried to beg off until the next day when I would be armed with heavy scar concealer, and big hair, and possibly a full body shot, or a picture of my feet, or anything besides a close up of my freaking FACE(!!!) but he had an idea, and I know he’s a good photographer, so I trusted.

It took me almost a week to be able to pull the picture up and look at it.

This is the result. (click on it to see it big) 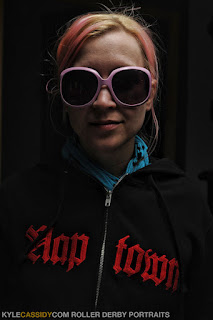 And if you look close, you can see the way my lip twists, and that my nose is not my family nose, and at least one of the scars on my face, but you know what?

I don’t give a fuck.

That is a cool ass picture, and I love it. I would print that picture on a tee shirt and wear it. I would show that picture anywhere. And if Kyle gets his book published, and that picture makes it in, I will be proud as hell to show it off. For me this is a huge milestone. Seeing myself, and not immediately focusing on all the things that are wrong with my face, but instead just seeing the cool picture that IS my face. I don’t have any anxiety, I’m not cringing to see it, nothing.

It feels good, and it makes me feel a little bit lighter, and happy, to maybe see an actual image of me, and not just the way I perceive myself.

So thanks for the picture Kyle. (Less thank you’s perhaps, for bringing the Jack Daniels into the house, but the picture makes up for it.)