This weekend was a perfect example of my weird brand of luck!
Some back story:
When I was a kid, our cat Charcoal died. It was incredibly traumatic, but being a kid, a few months after he died, I wanted another cat. I asked my Mom, and, since she had been reading the book Barbary, which features a Manx cat, she told me, “only if you find a striped Manx like the one in the book”. (Manx cats have no tails, and they run like bunnies. Very cool kitties)
So off I went the next day on my bike ride around the neighborhood. I ride up the hill, turn the corner, and watch a car pull over to the side of the road, toss a kitten out of their car, and peel off! I pedal over, and this little kitten, striped gray, with NO TAIL, comes trotting over. I keep up a steady stream of, “here kitty kitty” and she follows me home! Ring the doorbell to my parents, my Dad opens the door, calls my mom down and says, “You called it here, this is your fault”, and we have our little Manx kitty named Tasha!
That is one example of my weird luck, here is another.
I have always LOVED African Gray parrots, even though I’ve only seen them in person twice in my life. Lately, I’ve been bugging Dan for one for my birthday. We’ve been slowly doing some research, checking with local rescue groups, etc, but they aren’t the easiest bird in the world to find. (especially on a budget!)
So Saturday morning, right before we had a big rush, I was chatting with the dog groomer from next door at the shop about African Gray parrots, since he has lots and lots of contacts with different rescue groups. Then we get busy for about 4 hours. When the rush finally dies down, we’re hanging out in the cafe, and I look outside and see…
An African Gray parrot. On our coffee sign, just hanging out! I rush out the door, and up walks the owner of said parrot, and I start chatting with him. His parrots name is Mickey, and she was a rescue from when he worked at an animal hospital. She had a beak infection, and the owner left her there. I invited the guy in, and we got to play with Mick. 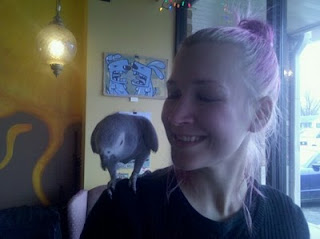 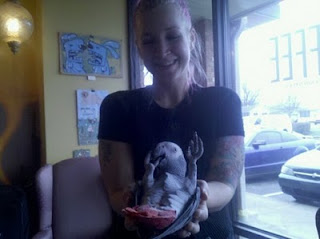 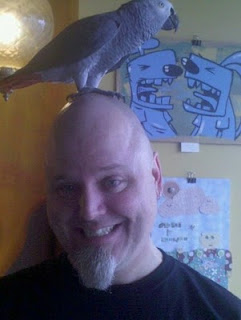 It was totally cool. So now I’ve seen an African Gray THREE times in my life! Mick is awesome too. She’s housebroken, does a cool kitty meow, and goes, “ruff, ruff”. She also plays dead. Totally affectionate bird. Her owner might be looking for a foster home for her for a few months, so we’re discussing that.
That is my weird random luck. Dill keeps saying I need to start voicing out loud how badly I want a million dollars.