Saturday we got to hit the road for a double header in Ohio against the Ohio Roller Girls. Playing Ohio is special for me. When we first started getting the league together, Ohio was starting their first season, and we went to their first game, which was the first time I saw real, live, roller derby.
We played them last year to a very narrow defeat, that was honestly my hardest loss of the year. I’ve been pretty eager for the upcoming rematches, first on their home turf, then in April, on our home turf.
Instead of riding in the van, I took the “Maiden Voyager” with Maiden America, Noxious Donna, and Eve Elle. We were planning to skip the after party and come back that night, as opposed to the fun hotel shenanigans I’m sure the rest of the girls got up to. (I had to work all day Sunday, so I HAD to be back that night)
The OHRG venue is very small, but the track was nice, and it was a sold out crowd. There was only ONE girls bathroom that I could find, which kind of sucked because I am very much a “drink lots of water and go to the bathroom a bajillion times before a bout” kind of skater!
The Warning Belles played first, and just tore up Ohio. It was beautiful. Our Belles are a fantastic B team, and in some cases I would consider them on the same level as other teams “A” team.
For us, we tore up the first half, then our foul trouble caught up with us in the second half, and allowed OHRG to gain a lot of points on us. We still pulled out a very solid win, but the second half has really reminded us to step up our training hardcore for when we meet them on the track next month.

PICTURES! All photos by Dr. X. 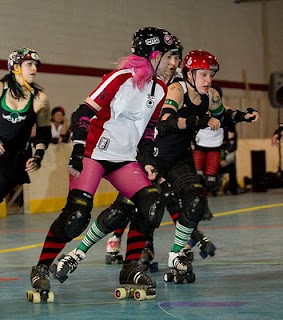 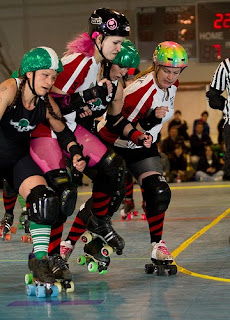 Yes, that elbow IS exactly where it looks like it is. And yes, that hurt. A lot. You can tell by the look on my face! I remember feeling that, but not knowing what happened or where it came from. I love trying to match my bruises to picture and video after the bout! 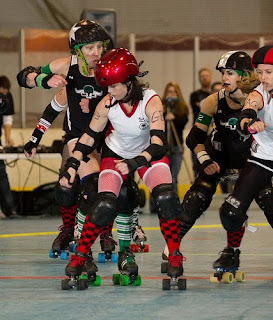 I love the look that Dirty Grrl (OHRG) is giving Eve here. She looks… annoyed by that tiny booty holding her back! 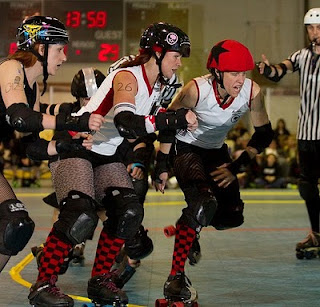 Trauma did such a good job of jamming for the Belles. OHRG had a VERY solid, good, defense that was tough to get through. It was so awesome every time we saw our jammers fight there way through!