Neil Gaiman has a zombie in his back garden. I don’t know why. It’s really close to his writing gazebo. Maybe it gives him ideas. Personally, it would freak me out, sitting alone at night in a gazebo with a zombie lurching out of the ground nearby.

It almost got me once. 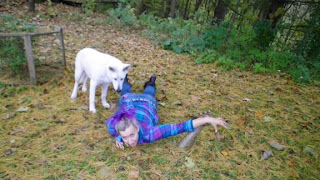 I had hoped Lola would save me, but she didn’t really care. Quiche had to pull me from it’s grasp.

Next time I went to visit, I did what any knitter would do. It was cold out, so I gave the poor zombie a glove. Maybe if it’s fingers were a little warmer it wouldn’t be so cranky and snatch at people as they passed by.

It also, I think, officially weirded Neil Gaiman out about me. Oh well, had to happen sometime. 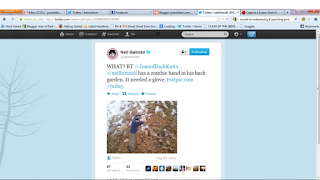 That glove made it almost a year. But surviving a midwest winter is not easy for a glove on the hand of a zombie. So I made another one. 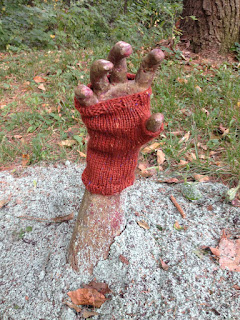 I think after this winter I shall make it a hat.