A couple weeks ago I had a pretty intense shift. It was an open to close, so arrive at 5am, didn’t get to leave until 9pm. Those are rough on their own, but then I had two customers that made a valiant attempt to just ruin my day.

They were hanging at the shop for a few hours and were sort of odd. Moving couches around, sitting on the table instead of a chair and then… I noticed one of them had her shoes off. We deal with that a lot in the summer. It’s kind of flattering, our shop is really comfortable, people get relaxed and start thinking of it as home, so they kick their shoes off! We have to ask someone to put them back on at least once a day, this particular day it was about the 5th time we’d had to say something to someone. In 11+ years I’d only had one person give me lip about it… until this day.

I asked the woman to put her shoes back on. At first she said, “ok” then she said “Even though my foot is just on the couch?”. And I explained, yes, even then because we’re still a restaurant, board of health rules still apply. She scoffed, she and her partner got a little huffy but I didn’t think it was any big deal. Customers kept coming in, I waited on them, Dill left to go take care of the dogs and everything was fine. I saw they were leaving while I was making a drink, told them “bye” and they didn’t say a word, which struck me as odd. But you know, I work in food service. Sometimes when you work retail or food service people treat you like you’re beneath them. That’s just part of the gig. 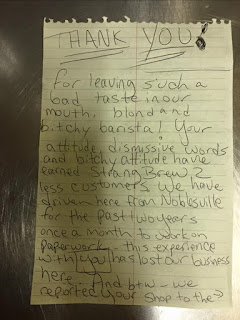 The back side goes on the call me “blond and bitchy” several more times, say that they were turning us in to the board of health, and left a name and number for the “owner” to call.

It sucked. It sucked that I had another 7 hours on my shift and I had that note left for me. It sucked that two people felt like they were in a position of power and used it to treat me like crap. The whole thing just sucked.

I checked our facebook and the ladies had left disparaging comments on there as well. (they have since deleted their comments after multiple customers told them to put their shoes on and apologize) I talked to Dill and we decided that we couldn’t just let this be. Confronting them wouldn’t do any good. People like that weren’t going to see that they were wrong. So how could we make the icky feeling go away?

By doing something good. 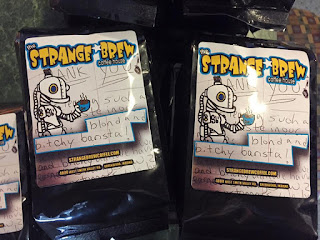 Meet the newest Strange Brew Roast. Blond and Bitchy Barista. A portion of the proceeds from each bag goes to Shoes for Humanity , an organization that helps get shoes on the feet of those in need.

We can’t make the note go away. We can’t make those women see that they did something wrong, but we can use their moment of mean to create a moment of nice. We’ve decided that our new slogan needs to be “stay positive, stay caffeinated”. That’s going to be the goal from now on. Hopefully at the very least we’re putting a little bit of good karma back into the world!