Wow. I’ve had “off” nights at practice before but last night… wow.. just.. wow. We did some hardcore ab and leg lifts. Rick, our new coach, has discovered his sadistic side. Instead of “normal” crunches, we were doing skates in the air sit-ups, that we held for long periods of time. Same thing with push ups and leg lifts. I was just dragging! During russian twists I was actually falling, having trouble staying up and twisting. That has NEVER happened to me!
Then when we were skating I was just a mess. Slow, couldn’t get my lines, etc. My legs felt like they were made of lead and I was trying to skate in sand.
Blech. Hopefully that was the end of it. I do not need another practice like that.

In happy news, here are some jammer hats, pic taken with my cell phone: 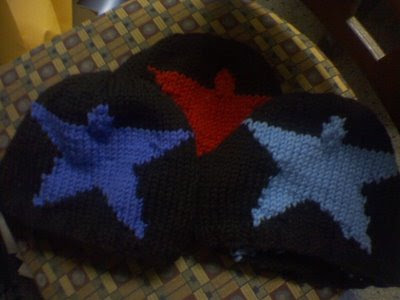 I used Cascade 128 instead of the Brown Sheep Bulky, which I found required a US 10 needle as opposed to the normal 10 1/2. Which was either caused by the yarn, or my tension. Either way, the size 10 worked really well, and I am loving the finished hats!
I’m working with Wiley on a PDF for the pattern correction as well, should be up here anytime now!