Saturday Mr. Dill Her0 and I, along with Danny Mac headed to Muncie. Dill and Danny were announcing a double header bout, Naptown vs. Cornfed. The bout took place in a skating rink, which I kind of love. While I enjoy derby on a grand scale, it’s a lot of fun to see the smaller leagues in rec centers and roller rinks. Plus, this one was a 90’s time capsule. $2 sodas and butterfly hair clips??? Amazing. Only downside is NO BEER! 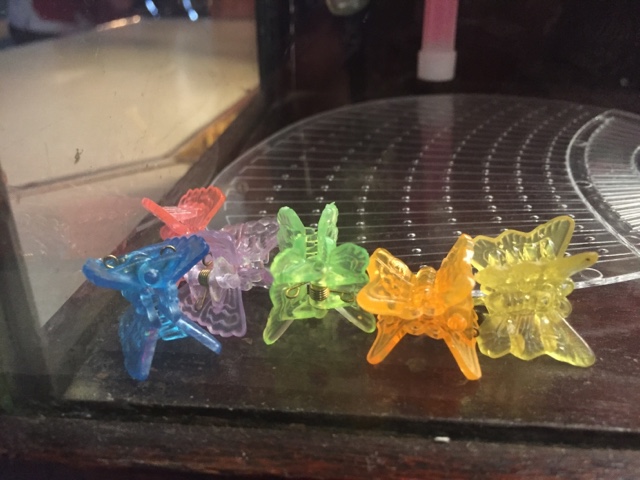 The first game was Naptown Warning Belles vs. Cornfed All Stars. Warning Belles are Naptowns B-team, but in all honesty, they’re the equivalent of most leagues A-team. I only mention this because Cornfed won the bout, and I would hate for anyone to think “Yea, but that was an A team against a B team!”. While technically true, Naptowns B team (and C team) is very, very good. Cornfed should be very pleased with themselves over their victory. They have really good communication on the track, (Pivot fOWL Play is outstanding) and jammers that were just fun to watch. (BOOMSDAY!) 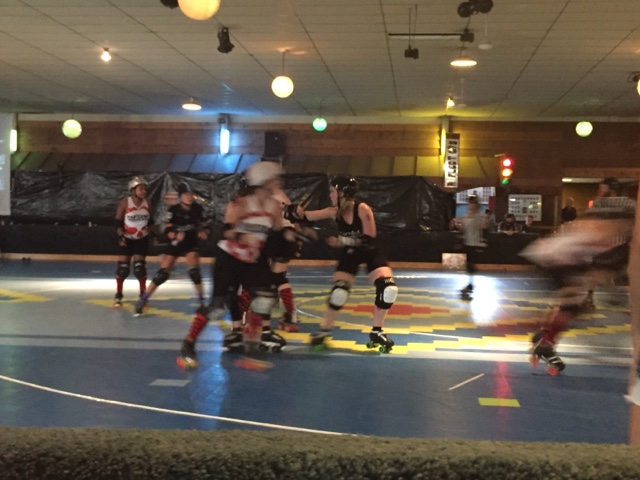 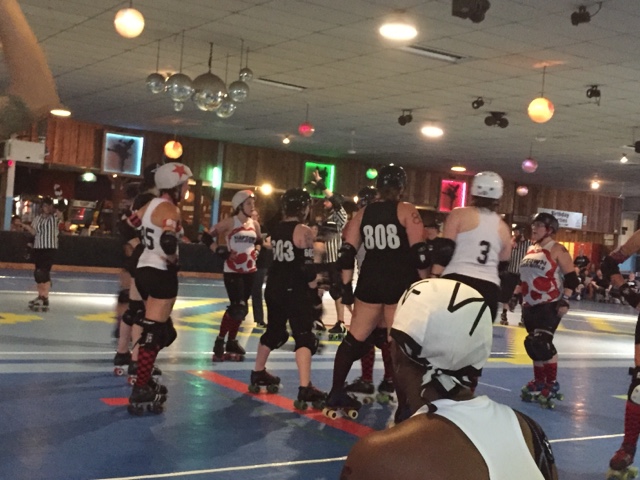 The score went back and forth in the first half, then NRG started letting themselves get spread out on the track. Cornfed jammers took advantage of that mercilessly. 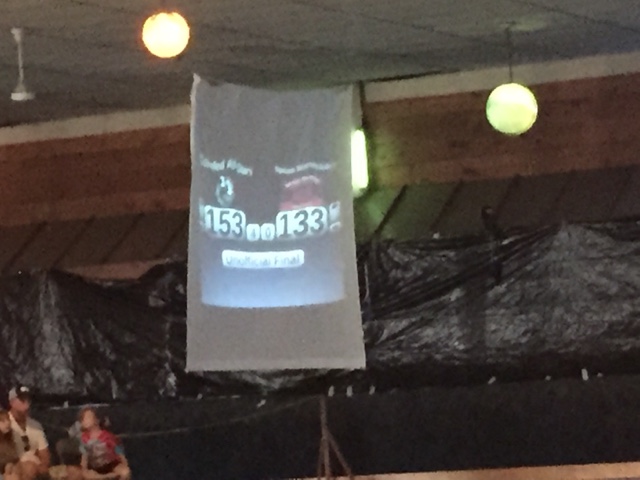 Sitting with the announcers, I got a pretty cool view of the coaches in action. Of course I know NRG’s coaching staff, but seeing other excellent coaches was a lot of fun. I always have an interest in the bench, having spent time coaching myself. It’s neat to see the calm zen bench, vs the fierceness on the track. 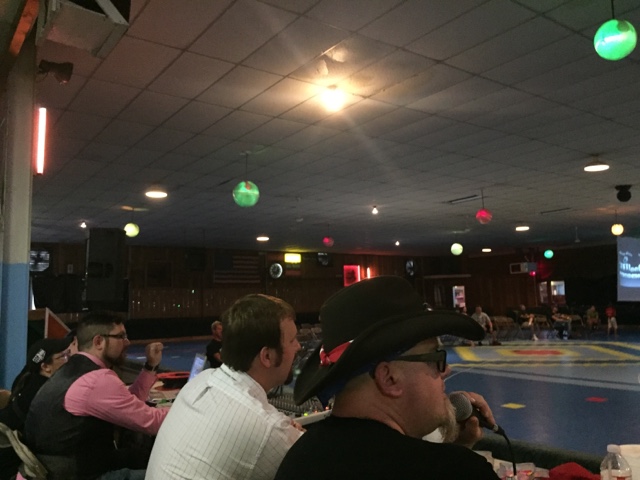 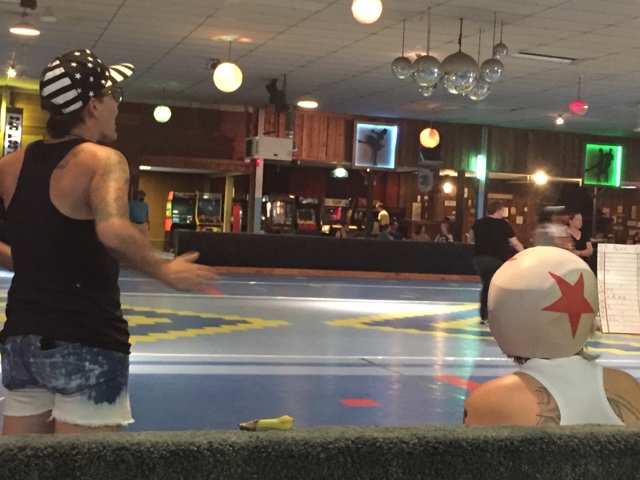 Before the bout Danny Mac had asked me if I’d ever thought about announcing, saying that I would probably be good at it. (He interviewed me once for an NRG video, and on camera, I interview fairly well.) I hadn’t ever really thought about it seriously, especially since I know what an incredibly hard job announcers have. The boys convinced me I should take the mic during one of the games, so I said I would give it a shot.

Let me tell you something. Announcing is HARD. I knew going in that it was hard. I’ve seen all the prep work Dill does at home, discussions between announcers, watching tons of footage as they prepare for games, learning names, numbers, pronunciations and stats, but knowing and doing are two totally different things.

I had Dill right by me, giving me pointers as I announced. I didn’t do too badly, but by the time I matched a girls jersey number to her name (OMG, can we PLEASE go back to names on jerseys?????) the moment would be over!

It was a lot of fun though! There was a skater named “Cosmo Pain” on Cornfed and I don’t know why, but I decided that her name needed to be said like 1980’s Wrestlemania. (PS- she’s like a wrecking ball jammer. Watch out for her)

Seeing the Third Alarm was great. It’s my first time checking them out this season, though of course I know a lot of the girls. I’ve watched Peyton Slamming go from stream announcer to skater, so it was great to see her as Captain of the team!

Other thoughts from the night:

Upon walking in, I had a skater know who I was and state that she had one of my books. I freaking love it when that happens! It puts me in a good mood for at least 24 hours.

I was so impressed with the number of Cornfed skaters that took the time out to thank the announcers, NSO’s and refs. I know there was a recent kerfuffle over an announcer quitting derby, with much speculation over it being due to the lack of thanks and respect shown to volunteers. I can say firsthand that thank you’s are way too rare in derby. It was nice to see Cornfed take a few seconds to make sure they showed their appreciation to their staff.

Strategy talk. When 2 minutes remain on the clock, and one team is down by a not unbeatable amount, say 20-30 points, the standard play always seems to be to get lead, get the points, as soon as the other jammer is coming up, call the jam. But if your team is down, and you’re lead, shouldn’t you just try and get as many points as you can and depend on your blockers to try and force a track cut on the other jammer? Like, make that their goal in life? Otherwise you call the jam, reset, and then the other team might get lead instead of you.
I know that I’ve always been coached under the theory “4-0 is better than 8-4”. but I feel like ending the game with your jammer as lead, gives you the better edge.

I’ve only ever seen Danny Mac as a stream announcer, yet he did really well on house! (Sometimes announcers don’t do well switching from one to the other) He had that perfect mix of clarity, excitement, and information that house announcers need.

The roller rink that Cornfed bouts in mixes caramel corn with regular popcorn. This is important to know.

Dill got Pokemon tips in the parking lot. 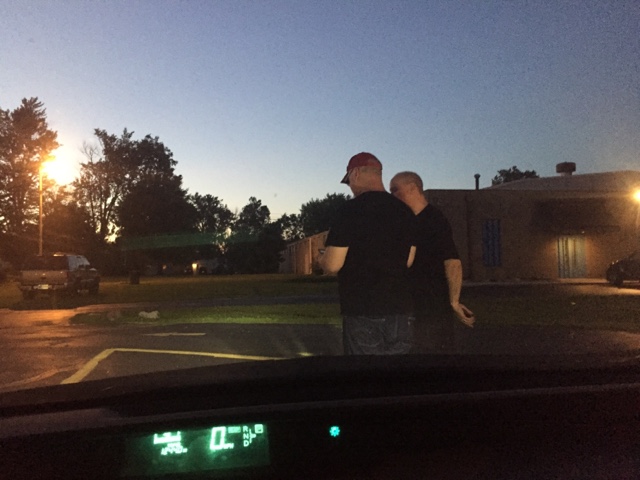 I promise my blog won’t turn into all roller derby all the time. But I have to keep my knitting secret right now while I work on some new patterns!