It’s been an emotional roller coaster around here the past few weeks. If you follow me on twitter, then you already know this, but my dog Ernie who is about halfway past 18 years old now, quit eating and drinking after a tumble down some stairs. After many frantic trips to the vet, we discovered that his kidneys had failed. We had a couple of options. Aggressively treat it with a two day stay at the vets and an IV drip, or attempt to syringe feed him food and water and see if we couldn’t get his kidneys going. If not… well, then we would have to let him go.

Look, logically, I know that all dogs die. But all dogs are not my Ernie. So I’ve honestly never really come to grips with the fact that someday I won’t have my dog. When the vet told me that I may be facing the day that I had hoped would never come, I had a complete breakdown. I decided to give him the weekend with me syringe feeding him. Ernie HATES the vet, and I couldn’t imagine leaving him at a strange place for an entire weekend.

By Sunday, Ernie was falling down when he tried to walk, couldn’t really seem to move well at all on his own, and had no interest in food or water. I was like a zombie. Wasn’t sleeping, when I did fall asleep I would wake up at the foot of the bed curled up with my dog and no memory of moving down there. After many tears I decided that we would probably have to put him down on Monday.

Decision made, I was holding Ern on my lap and picked up a vanilla Luna bar. Ernie perked up and looked at it. I offered him a bite and he started licking the icing. Then we started offering Ernie every bit of food in the house. He ended up eating a few strips of vegetarian bacon. The next morning when we got up, he started drinking water.

A couple weeks in and Ernie is drinking on his own, playing with his toys, though not really eating very much. (Though we’ve attributed that to a sore mouth and two loose teeth. No idea what to do about that, since I don’t want to put him under to have them pulled)

Right now I’m supplementing by syringe feeding him soft food, though he’ll eat some things on his own. Drinking is no problem, and this morning he chased a squirrel up a tree.

This whole situation has forced me to accept the fact that my dog is in fact, mortal, and someday I won’t have him by my side. I’m just so, so, glad that today is not that day. 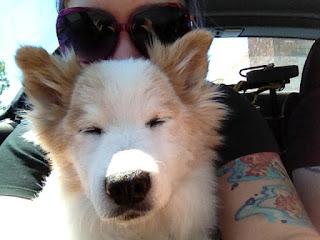 So that is the reason for my absence from this blog for a bit. Hopefully there are stress free weeks ahead with my little Ern, and I can get back to posting about the mountain of knitting that I am behind on! (Though as many of them are for books and projects due I can’t post TOO many details)!