Cram the adventure that was the past 5 days into one readable blog post? We went to Chicago, had a great bout, the truly Fabulous Lorraine drove very late into the night to come and get me, took me north for several days, and many, many things happened. Putting all of that into ONE blog post would be the longest, most epic blog ever!

I think instead, I’ll summarize.

Played a bout in Chicago, and it was awesome. In the write up I was mentioned as “the blocker to beat”. That made me happy.

Lorraine and Cabal came and got me. Lorraine was awesome, Cabal was the sweetest and let me snorgle his ears, and we had a hard time finding coffee.

Though we did find the White House in the Dells… but it was upside down. 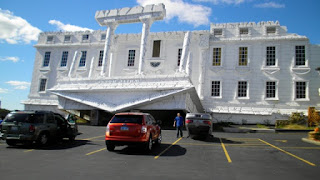 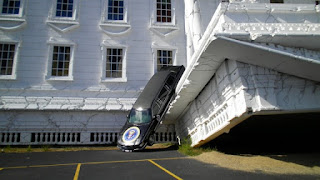 We ate at the best vegetarian place ever, and after much driving, I met Lorraine’s bengals. They are shy, but the sweetest, prettiest creatures ever. If you have room in your home, you should think about adopting one.

When Lorraine had work to do (which was often. This is a busy, busy woman)I wandered the grounds.

I found a little writers gazebo in the woods. 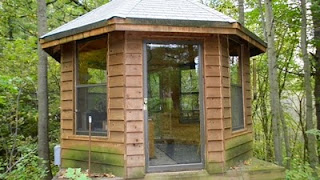 At one point I was attacked by zombies. 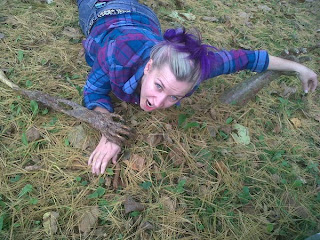 I made a narrow escape, but then was eaten by a tree. 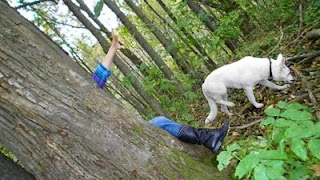 Made it safely back to the house, and wandered down to the library…. and started counting the shadows… 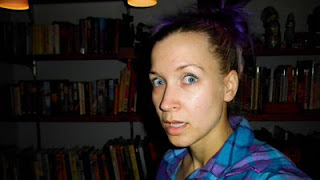 I also hit up Lorraine’s insane gym. If you ever see her bitch on her blog about how sore she is, believe her! Her trainer is sadistic with a smile! I do roller derby and I’m still sore from her gym! It was madness, but fun!

It was wonderful to finally meet my doppelganger. We were afraid of being the same person, but it turns out, we are not. We’re just very much alike. In fact, if we had done shots of tea every time we would find something else in common and say, “doppelganger” we would have been very full of tea and had to pee a lot.

The final night was spent with Birdchick and Lorraine. We looked at the stars, Birdchick took inappropriate pictures of Jupiter and it’s moons, and I remembered what it was like to live in the country where you can actually SEE the sky like that.

I wanted to stay forever, cook the food, make the coffee, and steal ALL the honey every single day. (I didn’t know honey could taste like that. It was incredible) I already miss it, and I miss my friend, and the dogs, and the deaf kitty from the attic. Not the ghost though. That was a little creepy.

Oh and PS: There was an octokitty in the kitchen!!!! I added another to keep him company! 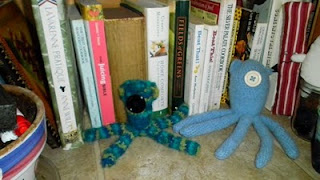