A month or so ago, a coffee shop customer offered to board my llama and mini. The downside? I wouldn’t get as much riding time. The upside? He lives about a block from the shop. So instead of a 30-40 minute drive to see my critters, it would be a 5 minute drive.
More mini and llama time!
Decided to go for the move… but now we had to find a trailer! Had one person offer me the use of theirs, which turned out to be a 20 foot cow trailer. Um, bit much for our truck, and for the llama and mini. The woman who owns the dog groomers next door to us told us to swing by and borrow hers. So we set everything up for the big move, drove about 30 minutes to go get her trailer and… it set too high for our truck hitch!
The sensible thing at this point would have been to cancel the move for the day, regroup, find another trailer and try another day.
HOWEVER, I am me. When I have a PLAN, the plan happens. So a few phone calls and texts later I wrangled up another trailer, and we were off again.
Drove out to the barn, grabbed Flippy, tied him up, loaded up my cart, harness, tracked down the odds and ends of my things that tend to get “borrowed” by other boarders, grabbed Starkey and loaded him in the trailer.
Then Starkey had an EPIC FREAK OUT! Took me a few seconds to realize why; there was a wasps nest right next to his head!. Untied him, hurried him out of the trailer, had Dill go in with his shoe and take care of wasp nest.
At this point, Starkey was like, “hell no I’m not going back in there! No way!” So my normally easy to load mini planted his hooves and refused to budge. I made a “butt rope” swung it around his back end, gave him a little tug, and in he went.
Hot, sweaty, and already worn out, I then turned to Flippy to load him. Flippy was not having it. Butt rope didn’t matter, he spit, made crazy llama noises, and flat out refused to get in the trailer.
20 minutes of struggle, and we were ready to just leave his furry llama butt behind! Then I had a brainstorm. Grabbed a bucket of grain shook it through the window of the trailer, and in Flippy went!
The answer to any llama training question is food. Always.

Drove them to the new digs, where they hopped and skipped around, and made friends with the resident mini, Cheesecake. 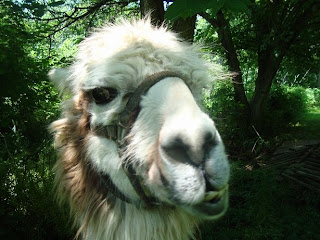 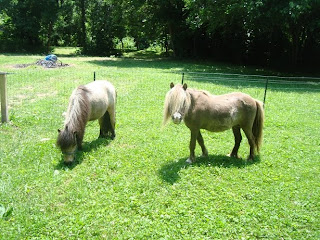 Cheesecake and Starkey are getting along fine!

Neighborhood children were delighted, as they had never seen a llama before.

Then of course, being an EPIC day, the customer who owned the property had to dash off when his son broke his arm in three places.
It was that kind of day for everyone I suppose.

But the animals are safe and sound, child is in a cool cast and has three pins in his arm, and neighborhood children are lining the fence staring in awe at the llama. (they’re used to the mini horse thing by now)
Next week I am starting my portly mini on a driving training program, since I had not realized how *ahem* PADDED he had become over the winter! Which will be much easier now that he is closer! (Wonder if I can drive my mini to work at the coffee shop???)