I know I haven’t posted the great big blog about Coraline yet. I just haven’t had time this week to type everything up. My quick summary? I loved it. Visually it was stunning. My one teeny, tiny complaint, (don’t read this if you haven’t seen the movie or read the book yet) I didn’t like that she didn’t save herself by her wits at the end. The boy had to intervene. I liked Coraline as the spunky, take charge, save her own arse character.
Anyway, like I said, visually… the movie was stunning. I was, of course, entranced by all the knitwear. Keeping in mind how small everything was, and how intricate, it was just amazing! A couple times in the movie, a cute little blue stuffed toy, that looked like a cross between a kitty and an octopus (or squid, whatever) showed up in Coraline’s bedroom. Of course, being me, I immediately got home and started trying to figure out how to make one! I went with crochet, since that’s easier to “freehand”.

Here’s the pattern if you would like to make one yourself!

Materials:
One size G crochet hook
2 skeins Pattons Classic Wool Merino in Worn Denim
Fluff for stuffing
One extra, extra large button. I couldn’t find one big enough, so I ended up having Dill make one out of Sculpy. The picture you see of it now is unbaked. Because I am impatient.

Repeat for other side, so ears are even on each side of body. Weave in ends

Legs: (I had to go by screen caps from brief appreances on youtube promo videos. I only counted six legs on the little guy, so that is how many legs I gave him. Which I know means he is not an octopus. But calling him a Sixtopus sounds dirty. EDIT– FIVE legs! See what happens when I blog/design at midnight?

Start 1″ from bottom of body. Pu and sc 12 sts in a circle. Sc in a circle for 11″. Stuff tube with fluff as you go. Sc2tog until tube is closed. Weave in ends.
I put one leg on each side, and 3 legs in front, since that is the way it looked on the video.

Felt by throwing in the washing machine or shower. It took 2 runs through for him to look like I wanted.
Hope everyone enjoys the pattern! It is just a rough draft, so feel free to point out any issues or questions, and I’ll be glad to help! And go see Coraline!!!

Weird Octopus Cyclops Kitty Thing from Coraline attacks Dill…. He does not look amused. Probably because he’s trying to make his wife a button out of sculpey.

For the curious, those are my wedding cake toppers, for real. Bride and Groom PEZ people…

weird Octopus Cyclops Kitty Thing from Coraline has a temper! It attacks!

Ernie does not approve of this fuckery.

It’s late. I must awaken and serve coffee to the masses in 5 hours. Night all. Hope you like the freebie! 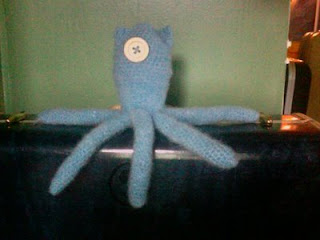