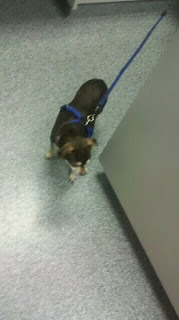 This is Sassy at the emergency vet on Saturday!

Our house is primarily vegetarian. I’m the one who usually cooks, and I haven’t eaten meat in about 18 years so needless to say, we are not a meat and potatoes kind of family.

Dill however, is a meat eater. Once in a while he leaves and gets a hamburger, or chicken, or fish, and eats it. No big deal, except the animals tend to go a little crazy. Actual MEAT instead of dry food makes them start prowling around Dill and yowling or whining for whatever he has.

Thanksgiving, we hosted our annual “Misfit Thanksgiving” for ourselves and our friends who don’t have family nearby, or whose family goes out of town, or who simply need a beer break in between family functions.
There was tofurkey, potato salad, fresh baked bread, ribs, wings, and chicken. We all had a wonderful time, ate too much, played lots of rock band, and Dill punched a cup cake.
The next day we dashed off to work, locking the dogs in “their room”.
When we came home, we discovered the dogs had managed to get into the trash (broken baby lock we had not yet replaced) and ate coffee grinds and CHICKEN BONES.
Ugh.

Ernie, who has a very sensitive stomach, threw everything up about 2 in the morning in bed. Sassy, who has an iron stomach, had an “accident” about 230 in the morning on the fresh sheets. Then another in front of the bedroom door, another in the kitchen, and another, and another…
At some point we realized that there was blood, and got worried. Not too worried, since, Sassy being Sassy, this has happened to her before. (When she ate the jewel case for the cd actually)
We decided to see if it would stop with the next round. When 2 rounds later, there was still a LOT of blood, I started calling emergency vets.

The first emergency vet said that since she was still drinking, acting chipper (she was bouncing around, wanting to play, jumping on us, etc) to keep an eye on her and call if she started acting lethargic.

We should have listened to her.

We panicked, and called a different emergency vet. They freaked out, told me to bring her in RIGHT NOW, etc, bad doggy parent for waiting this long, etc.

An x-ray and 4 hours later, we were told that she was fine, and unless she started acting lethargic to bring her back in.

Now. Here is my complaint. I’m glad my dog was fine. Really glad. BUT, when I took Starkey to Purdue, after hours, emergency colic, etc, he had an iv, fluids, 4 days of board, 24 hour care, feed, a companion animal, blood work, x-rays, essentially everything he could need to ensure his health and happiness from one of the top animal hospitals in the country.

The cost of ALL of that and a 4 day stay at Purdue was cheaper than 4 HOURS at the emergency vet. MUCH cheaper actually.

So lesson learned. Next time Sassy eats something bad, I’m just going to feed her to the horse.