It’s been a very long time since the last “What Sassy Ate Today” post. I was very pleased with Sassy for her lack of eating things. She’s slimmed down a bit, her hips no longer bother her due to her being overweight, and I no longer dread coming home to see what she’s gotten her little paws on.
Until yesterday. (apologies for the camera phone picture) 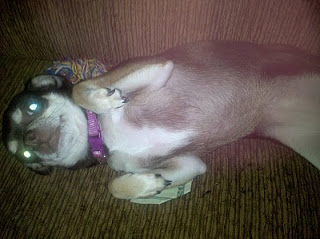 Sassy ate $40. Luckily only $20 of it was marred, and most of the bill is intact, so I think the bank will still take it. The other $20 she was hiding under her belly for later noms.