Saturday was bout one of season 4! Holy crap! Am I seriously skating my 4th season? Mind boggling.
Anyway, there were some big changes in this bout for us. First of all, we moved from our beloved Toyota Blue Ribbon Pavilion to the Pepsi Coliseum. While I loved Blue Ribbon, we’ve simply outgrown it! Fans had trouble seeing during crowded bouts, we had to cap our attendance and there were several times where we could have sold hundreds more tickets than we did, simply because of seating restrictions.
The biggest downside to Pepsi is the sport court. Some of us had to show up at 10am and spent HOURS setting that damn thing up, then of course tearing it down afterward, when all we really wanted to do was drink and celebrate!
But I’m getting ahead of myself there. Friday before the bout, I did my usual run around like a crazy person routine. I had to pay horse board, get a new knee brace, and make another mini octopus kitty squid thing from Coraline. I made the first Octokitty Mini right before the Ft. Wayne bout, which we won, and sent it to live with Neil Gaiman. I did NOT make another Octokitty thing before Ohio, and we lost. WE LOST!!! For those of you that know me, you know what frenzied weirdness this sends me into. I did something for a bout, and we won, did not do it for a bout, and we lose. This means I add a crazy person superstition to my list. It varies from season to season, but currently it looks something like this:
I MUST:
Paint my toenails a shade of pink. Then chip some off my big toe. Bonus win if it chips naturally
Wear my lucky panties
Have pink in my hair
Listen to my special playlist before the bout. The music varies, and gets adjusted for bigger point spreads. It gets scrapped if we lose.
Knit before the bout
Wear pink or blue eyeshadow, or some combination thereof.
Drink a cup of Jasmine Green tea, steeped in my red ipot kettle. Not the silver kettle, the red kettle. And my Alice in Wonderland Mug. No other mug will do. God help anyone in my house that dirties that mug before bout day.
Wear that seasons lucky fishnets. I can ONLY wear the same ones from last season if I scored points in the last game I wore them in.
Read Wicked Lovely the week before the bout.
New- I must crochet a blue octokitty the night before the game.

I MUST NOT
Drink out of the blue and white Air Force water bottle.
Wear my pink and white sneakers. Star sneakers, or black and pink sneakers are okay. Pink and white are cursed. (I know… seriously)
Have any dollar coins in my wallet, pockets, or purse.

I know. This shit is weird right??? And let me explain, I am NOT a superstitious person by nature. I have a black cat that crosses my path every morning. If I see an upside down penny, I put it in my damn pocket! Breaking a mirror is just a sign of a really good party in my opinion. (or a really bad hair day)
But seriously, something about roller derby has turned me into a total freak. So before the bout against Bleeding Heartland, I made another octokitty mini. 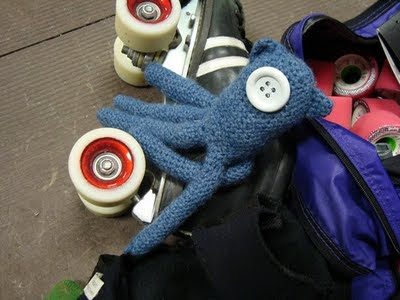 Needless to say, we won the bout against the Bleeding Heartland Roller Girls. I forget the exact scores. Our JV team won something like 124-33 and our Sirens (yay me) won somewhere around 121-33!
I’ll do a game recap later, but for now, here is Octo Kitty enjoying the post bout festivities! 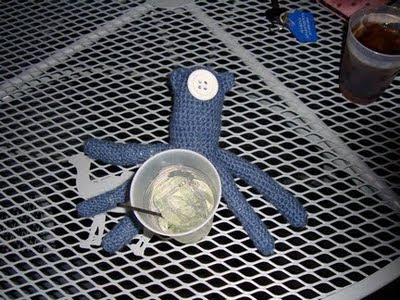 You know, I’m very, very glad I found this picture on my camera. That is Octo Kitty with my empty glass of midori sour. After MONTHS of not drinking (and no sugar, no white flour yay I lost 30lbs not that I’m going to mention that AGAIN) there is simply no way that I drank as much as my empty cup count said I did at the after party! I suspected that someone was drinking my drinks, and I originally blamed 4Leaf Cleaver. I must apologize to Cleaver, because clearly, it was Octo Kitty the whole time! 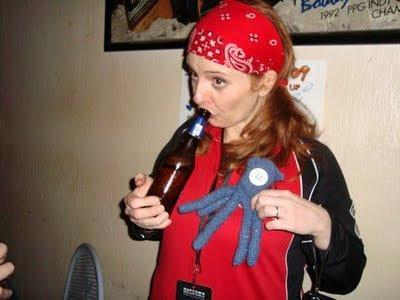 Okay, fair warning here. Should you ever chose to make your own Octopus Kitty Squid thing from Coraline you must be warned. Not only do they promote drinking (and steal your drinks) they are notorious boobie grabbers. 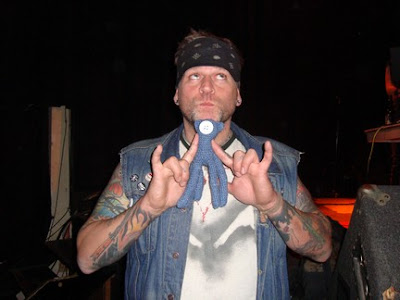 Octokitty was a social butterfly, and made friends with Greg the Mayor. 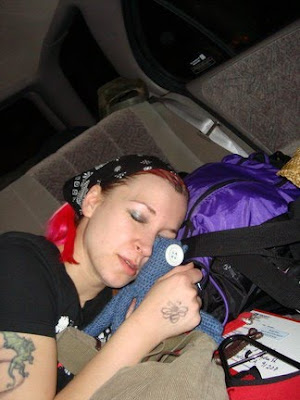 Despite the fact that Octokitty was stealing all my drinks, I ended up very.. lets say giggly and sleepy very quickly that night. After dancing the Thriller, making a pyramid: 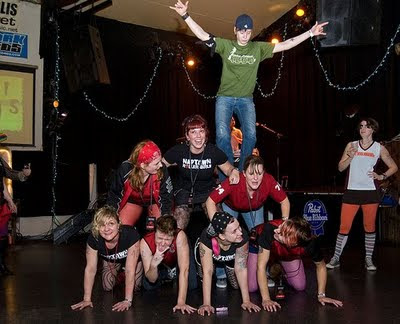 (thanks for catching that Marc)!

I was a bit worn out!

I’ll post an actual bout recap in a couple of days, but for now, I need to decide what to do with this new Octo Kitty. If I send it off to Neil Gaiman again, I will look like the scary stalker fan and probably get put on “a list”. But what if it’s bad luck to NOT send Octo Kitty away? Ah the dilemma! I’ll worry about it later. For now, I drink tea and get my butt back to pattern writing, before I get (further) behind on work!